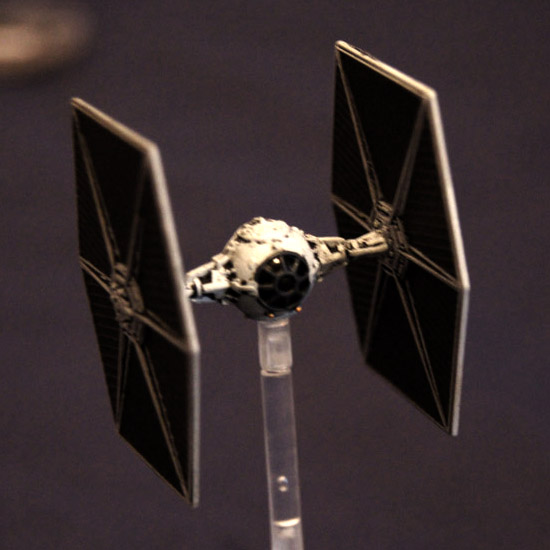 So Lex turned up with a copy of X-Wing to the last games weekend. No one had really looked at this game before, and Lex had only quickly skimmed the rules on the train down, nethertheless we played through 4 or 5 quick games and had a lot of fun with this.

Ok, so lets get this out of the way first, the game comes with pre-painted miniatures. I’m not entirely sure where I stand on this development. On the up side you can open the box, assemble and play in next to no time, but there is something that feels oddly wrong about buying painted miniatures. Our games group are hardly purists that are going to get uppity over games that don’t accurately represent ground scale, use abstraction, and indeed come with painted figures, but still, there’s something not right about it.

However, the miniatures themselves are of fair to good quality in terms of detail (more bendable than regular hard wargaming plastics), and the paint job is good (that is to say not excellent, but as good as any of us could have achieved in reasonable time).

The only complaint is that I would have liked a few more miniatures (only 2x TIE fighters and 1x X-Wing are provided) and made them slightly smaller to offset the cost. Also the scales are not quite right with the TIE fighters being larger than they should be next to the X-Wing. These two factors combined with the paint job leads them to feel a little toy-ish. But in terms of accuracy to the films/lore, they are spot on. 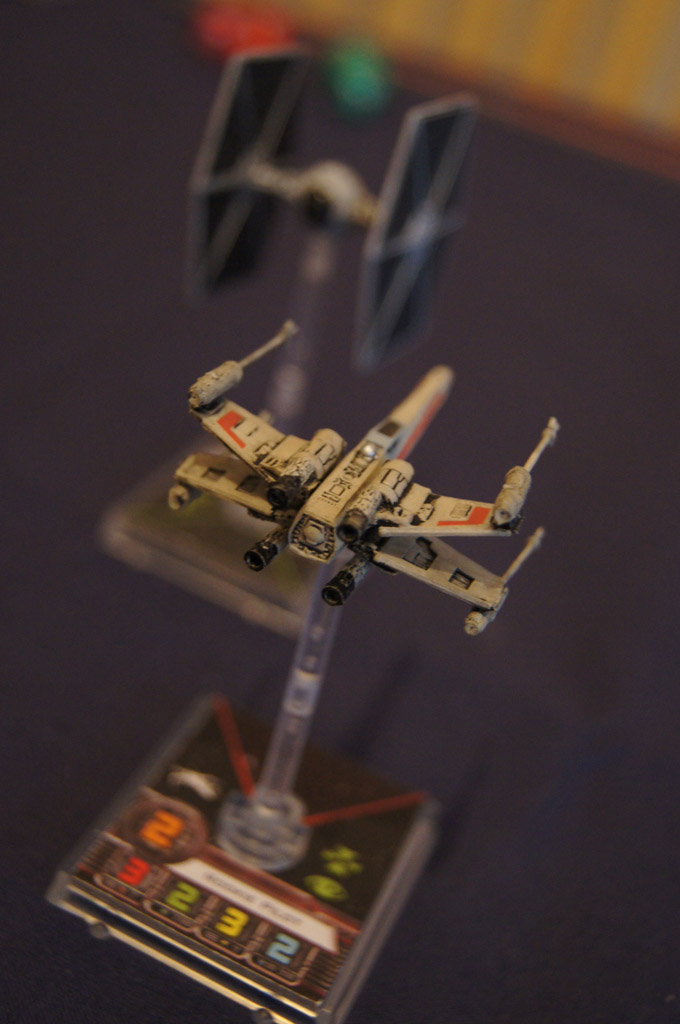 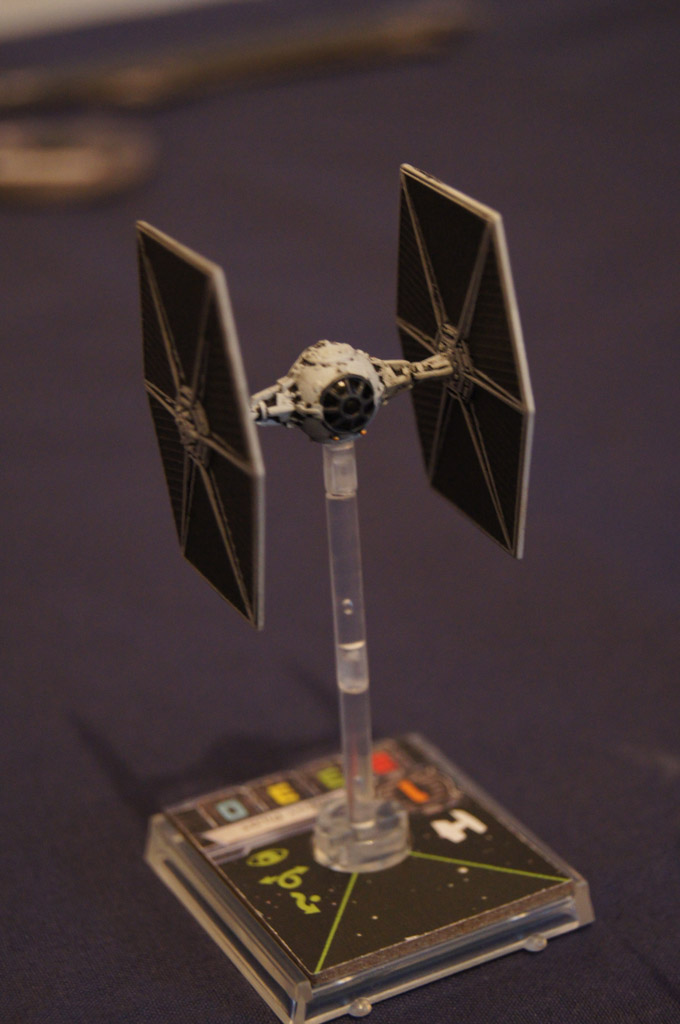 This is where the game shines. Cardboard templates are provided for shooting and manoeuvring. The Quality of the card is top notch. Each ship gets a little rotary tracker to (secretly) record orders on, which is a nice touch. Each ship gets a bunch of nice upgrade and special pilot cards, and there are tokens for tracking everything that needs tracking. All in all, top notch production quality. 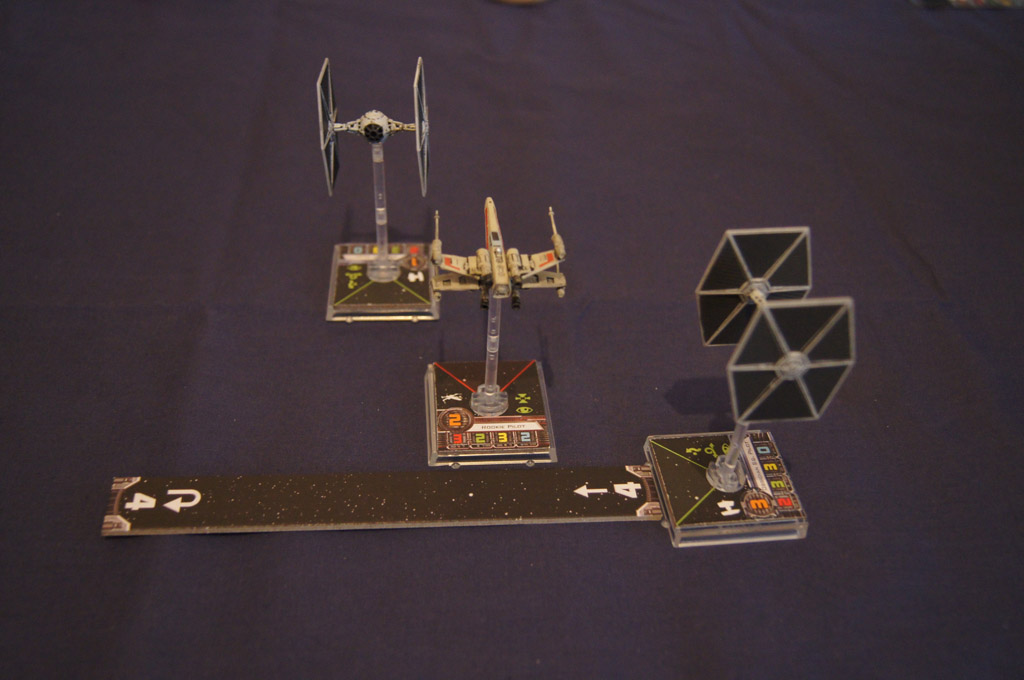 The rules are quick and simple, relying on some bespoke D10 dice with symbols for shooting and dodging. We managed to play 2 games with the quickplay rules, and another 3 with the full rules which add on a lot of nice snacks. We didn’t encounter any ‘breaks’ as such with the rules, although a few ambiguities when it comes to clipping through ships, although this was a by-product of the brevity of the rulebook, something which isn’t a thing to be criticised.

The movement is based on hidden orders, similar to Full Thrust, however the little order tracker gizmo for each ship is a nice touch which makes the notation of orders really quick and easy. It feels like Full thrust would feel if it had a marketing department and a focus group of 13 year olds let loose on the rules for a weekend (Please god never let that happen).

Shooting is really well handled by the custom dice, and the full rules allow for all kinds of upgrades to the ships. Most importantly the rules are fast and fun, with no real room for beardyness.

There are expansions to add new ships to the game, including TIE Advances, TIE Interceptor, and Y-Wings. The only conspicuous absence is the B-Wing, which they better get fucking busy adding to the game.

I’m also unsure how they are going to add in the millennium falcon and bigger ships without busting the game somehow. Also the scale inaccuracies of the models are going to get even more apparent.

Ok, I said a lot of bad things about this game in this review, but overall I love it. For the cash to buy in you get a solid fun little game with room to expand. It flows quickly, the rules are clean, and it feels like how a fighter game should feel. In terms of production quality its up there with Games workshop as a solid professional product. Although I said its a little toy-ish in some aspect, when you think of the target audience, its bang on the money. Aimed not so much at seasoned wargamers, but the introduction market, its small, cheap, fast. In short nearly perfect. 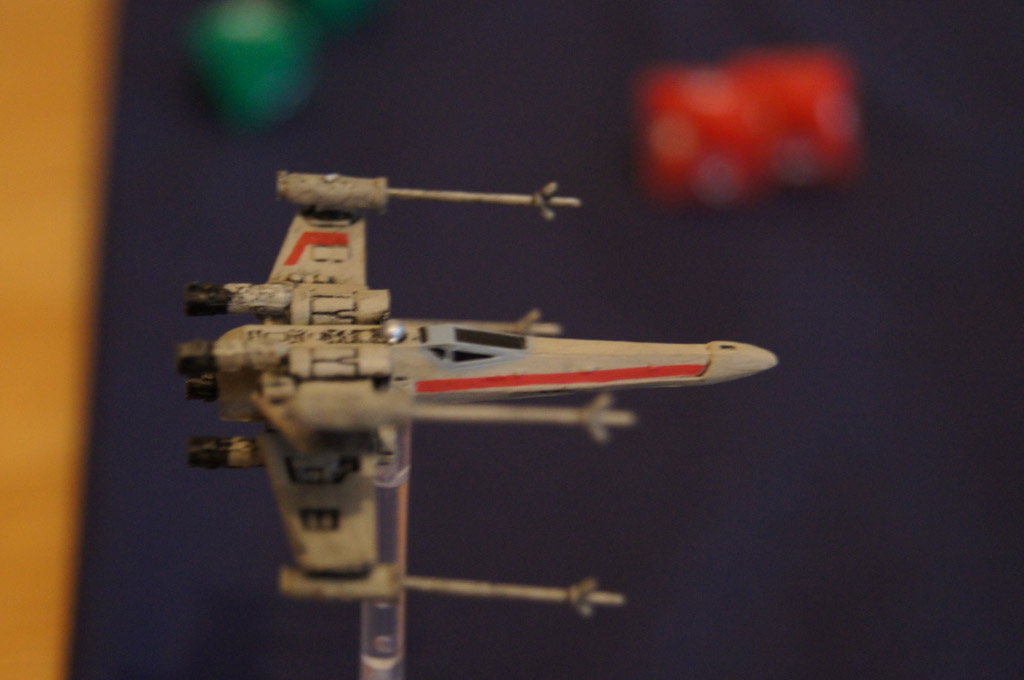