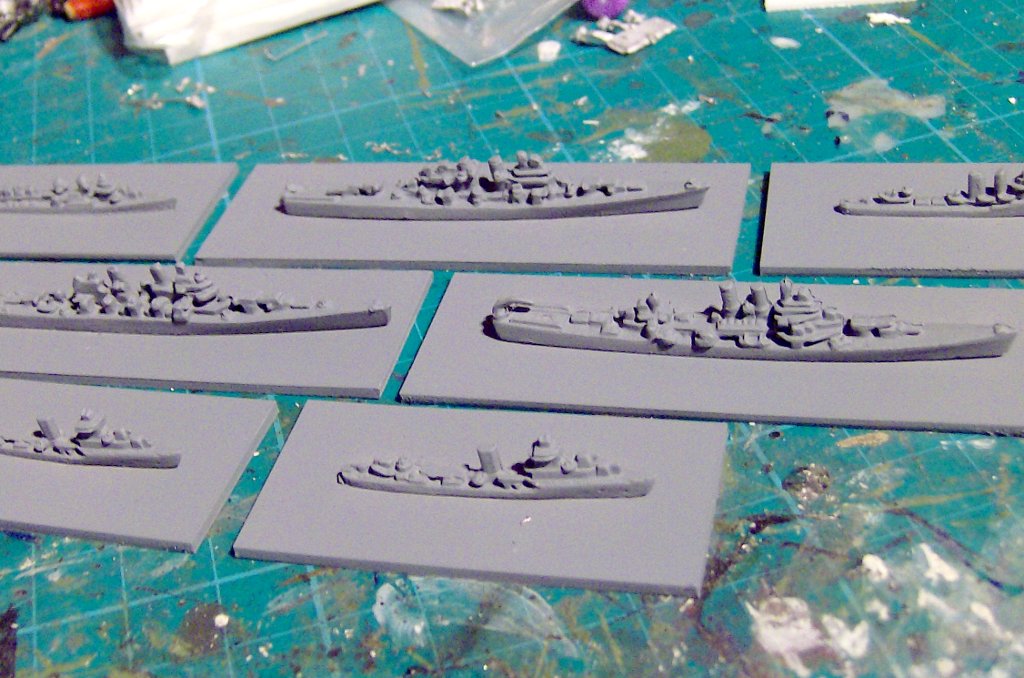 Inspired by Toms success with Army painter system in his Great War project, and given how deeply painful my last project (28mm fantasy) was without it, I figured it was a no-brainer decision to give it a go on these models.  After some googling it looks like no one else has tried using “WonderDunk” on models of this scale, so it should be interesting to see how these turn out. 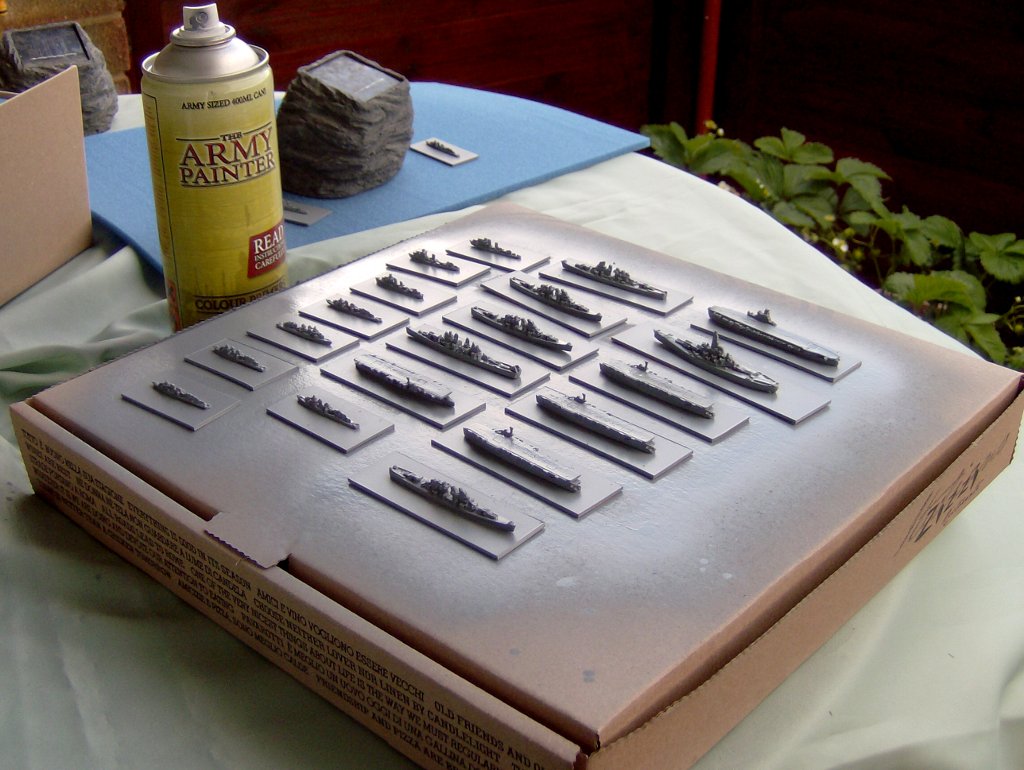 Everything starts out sprayed “Uniform Grey”.  I tend to either spray in very rapid short bursts, or just hold the valve down a tiny fraction to let out only a thin stream of paint, this avoids flooding the detail, although takes a little while to get used to doing.  Perhaps I should invest in a decent airbrush.

Once dry the spray leaves a wonderful matt finish that takes paint brilliantly.  I am now wondering if it was wise to stick the models to the plasticard bases before painting, as now I have to paint the substantial surface area of the base blue once the ship is painted.  After some pondering I don’t think it’s a big deal.  The layers of paint should further bond the metal model to the plastic base (in theory at least).  If I had sprayed the ships grey and the bases blue, I would then be faced with having to bond painted model to painted base, which doesn’t lend itself to durable models. 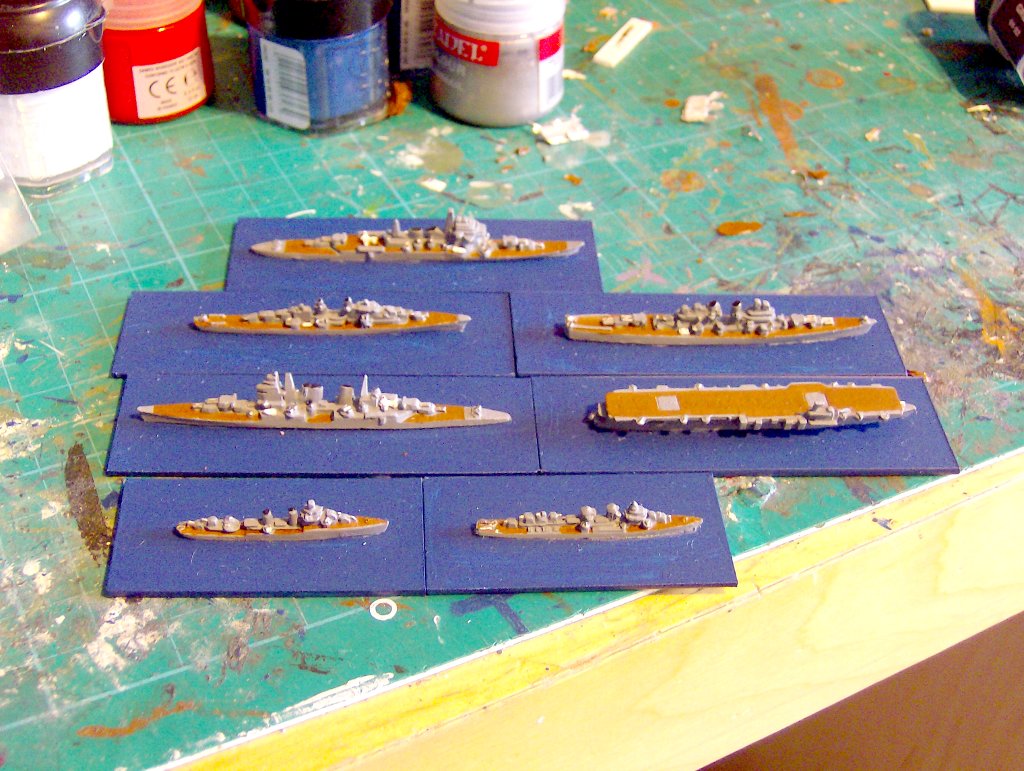 Despite preferring Vallejo Acrylics to Games workshop paints, I had to roll with what was in stock at the local games shop, consequently all colour codes are GW standard.  The wooden decking was picked out in “beastly brown”, and the guns and AA pieces in “shining silver”.  Lifeboats and other misc detail were picked out in “skull white” and the base was coated in “Regal Blue”.  Lastly, “Codex grey” is a good match for the uniform grey spray undercoat, so if you go over the edges whilst painting, you can tidy up your work with codex grey. 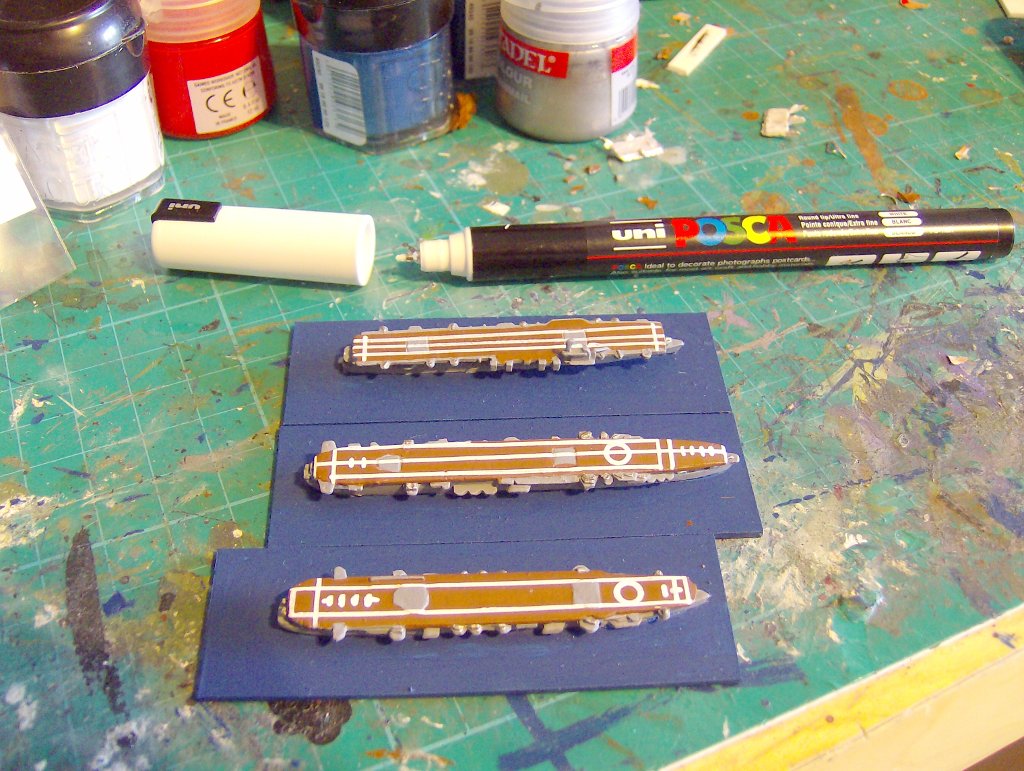 Deck markings on the carriers were done using a UNI-POSCA marker pen, which covered surprisingly well.  I used the ‘ultrafine’ tip which is apparently 0.7mm thick, though the actual line it draws is well over 1mm thick, despite this the deck markings looked great, and the marker pen trick gives me a much most consistent line than my painting skills can yield.  It is however a very bright white, though I expect the dunk will tone this down a fair bit (Or at least i hope so) .