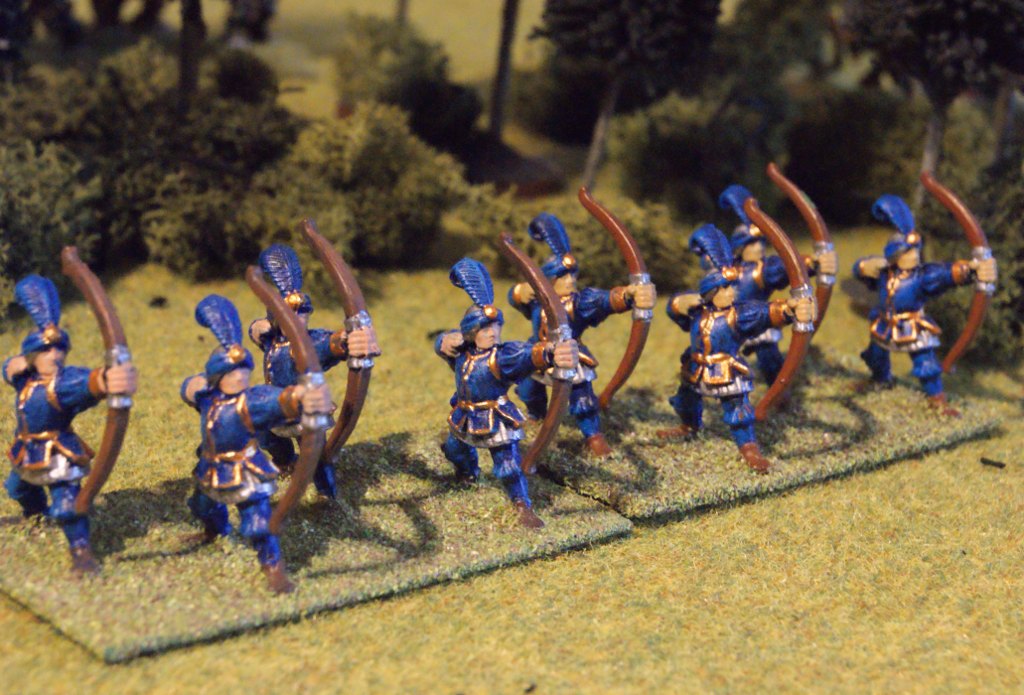 Shooter, or ‘bow’ as I call them, is probably the most powerful unit type in the game.  Although I am not going to claim they are “Broken” as such, they are slightly undercost in terms of points.  Faster than most foot units, they fare well in bad going and have a 200pc ranged attack in both their owners turn and their opponents turn.  They are destroyed by mounted units in combat, which is their only weakness.  So not only are they a ranged threat, but they can maneuver quickly and fight well on the rough and get to pick the ground they fight on more often than not.  The Semi official errata brings their movement down to be in line with Blade and Spear, however I went one step further to rebalance shooters by also giving warband a quick-kill against them as well as mounted, as I figured berserkers would do well once they are in amongst the archers, and besides, since the semi-official errata increased warband movement I now group warband in with the cavalry anyway.

I Wanted Bow/Shooter (you say tomato) to be one of the element types which the good guys get a lot of and the bad guys get none.  I had this mental image when designing the army lists of a thin blue line of archers/blade beating back wave after wave of horde.  Fortunately there were plenty of models on ebay at super-cheap prices to bulk out dozens of these elements.

First Up were the Archers from Battle masters .. each box shipped with 15 of these, and I had 30 from ebay for next to nothing, and 15 in my loft (My Copy of Battlemasters has lain in the loft unloved for over 20 years, recycling is a beautiful thing).   There are also a small number of crossbow models with battlemasters (either 5 or 10 per box) which got lumped in as well. 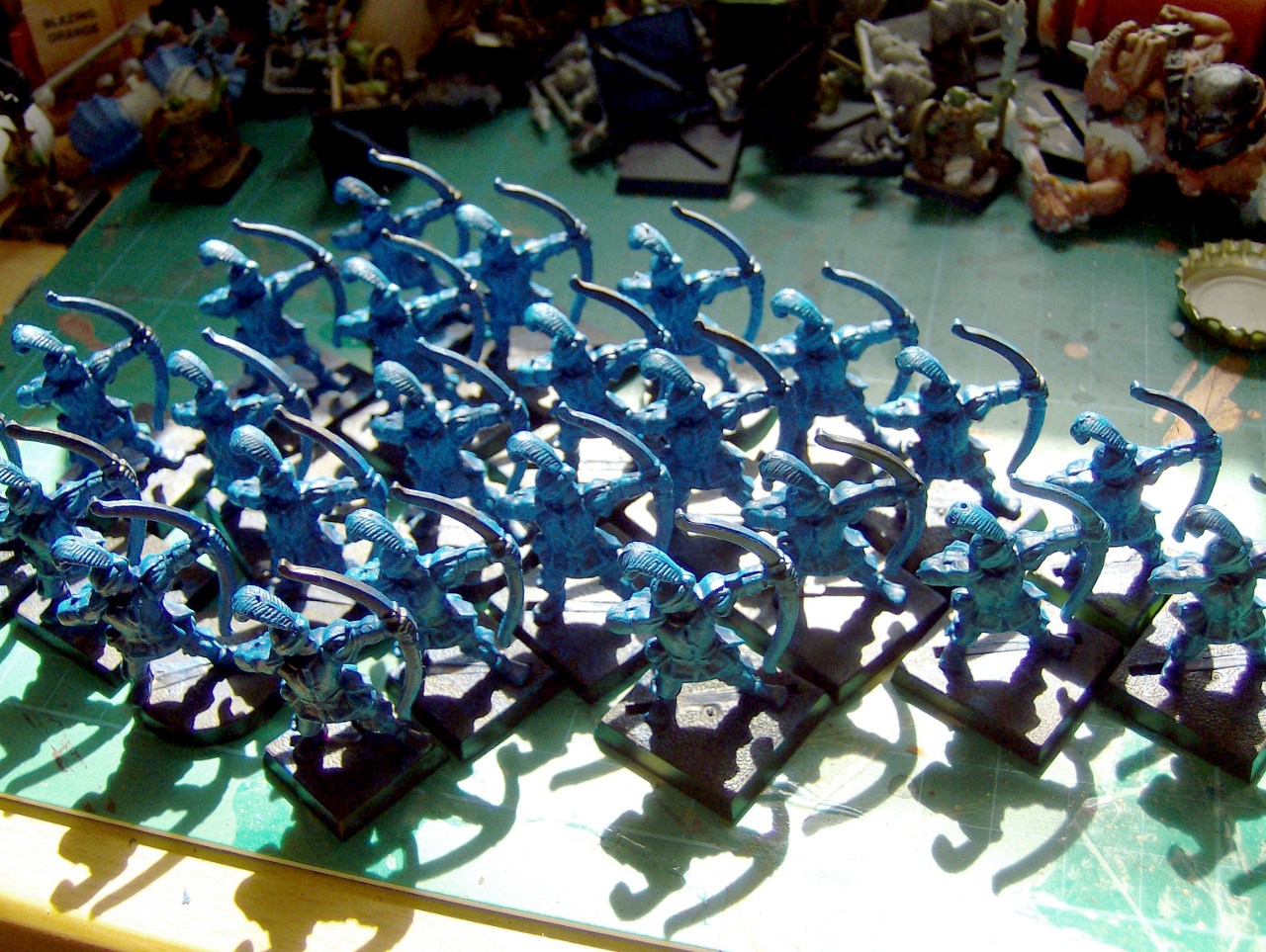 Next up On the Recycling heap were the archers from the Warhammer Fantasy Battle 5th Edition Boxed set (That is the box that came with Lizard-Men and Brettonians).  I Think the box contained around 24, and I got a bag of these guys on eBay for around 15p per figure.  Although There were enough Human archers from Battlemasters to fill the ranks in the end, and these were never used, but remain bagged up incase I ever choose to expand the project. 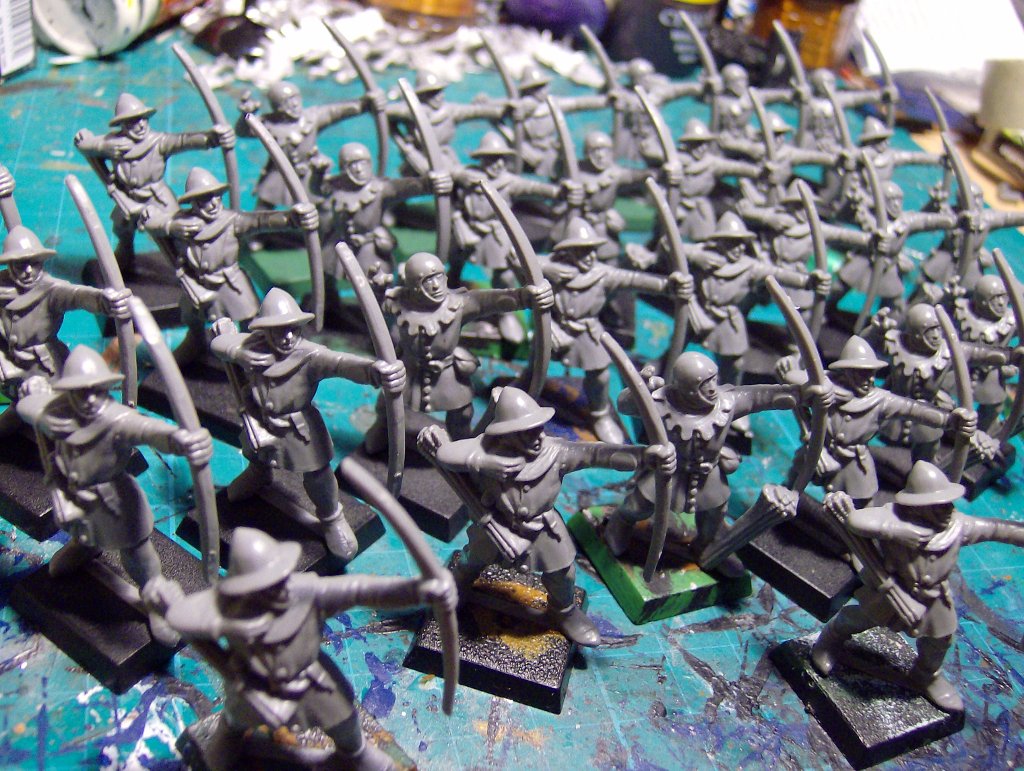 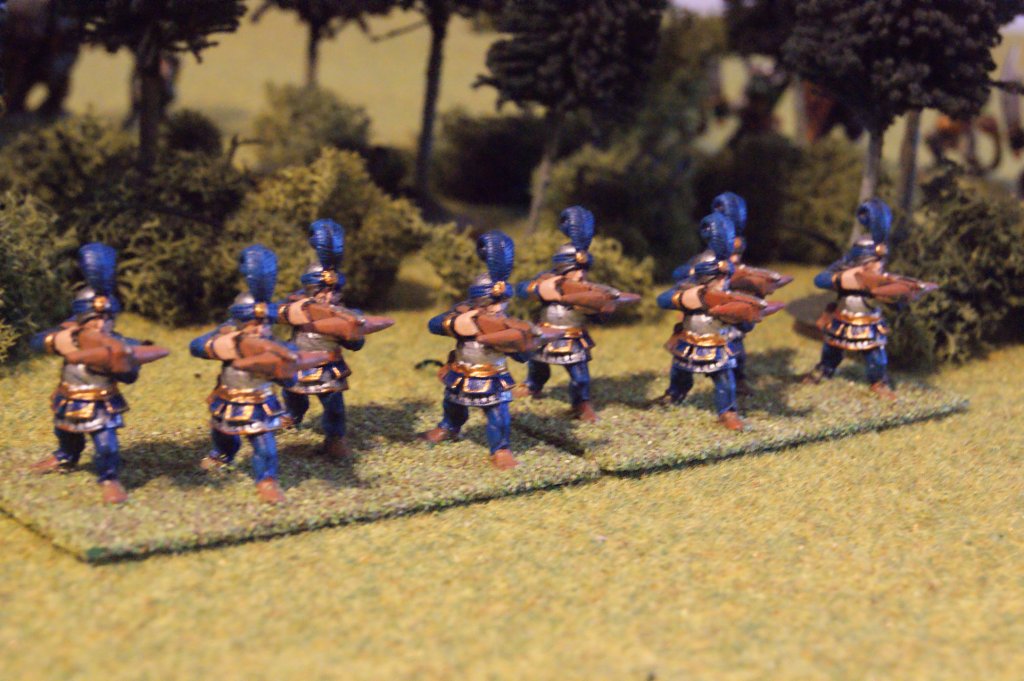 One of my favorite models from Old-school WHFB is the elves from the Warhammer fantasy Battle 4th Edition Boxed set, that’s the “Classic” era one which shipped with Goblins and High Elves.  It took a while for these to crop up on eBay, but I did manage to snipe 15 of them to do a few stands of bow that would look a little different. 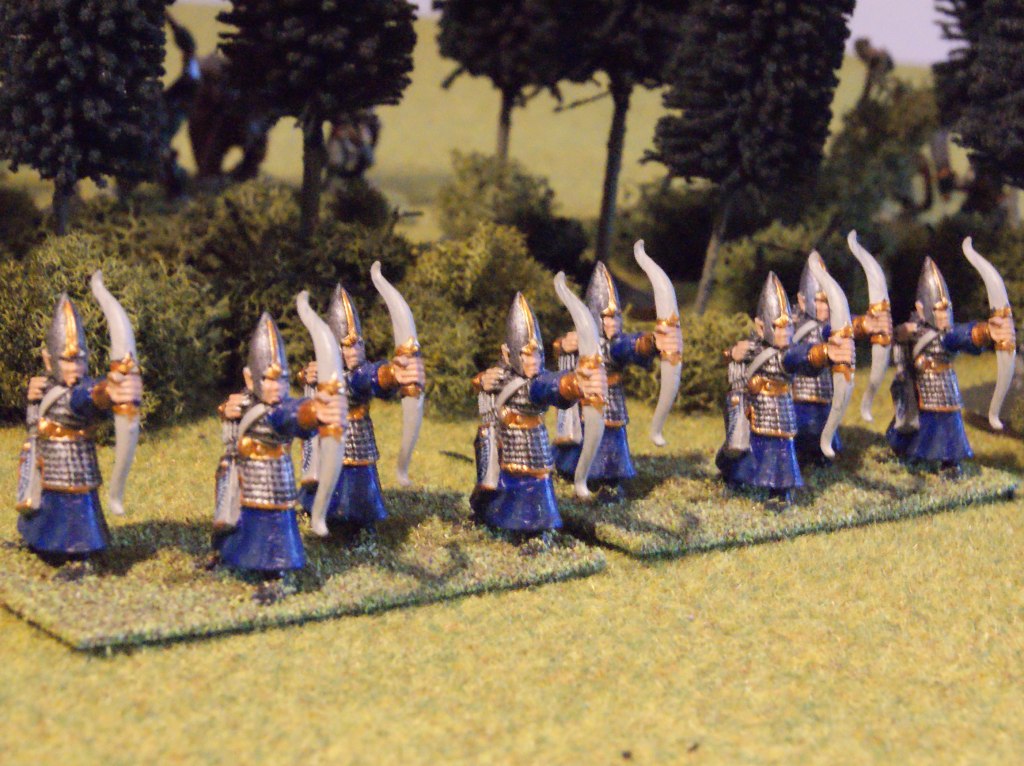 Last up for now were the Wood elves, I wasn’t planning on doing much more bow, but I saw these models and couldn’t resist.  Besides I am planning on splitting the “Shooter” unit type into “Archer” and “Ranger” when I rewrite the HOTT rules, and it would be nice to have some cool looking ranger models to use for play-testing. 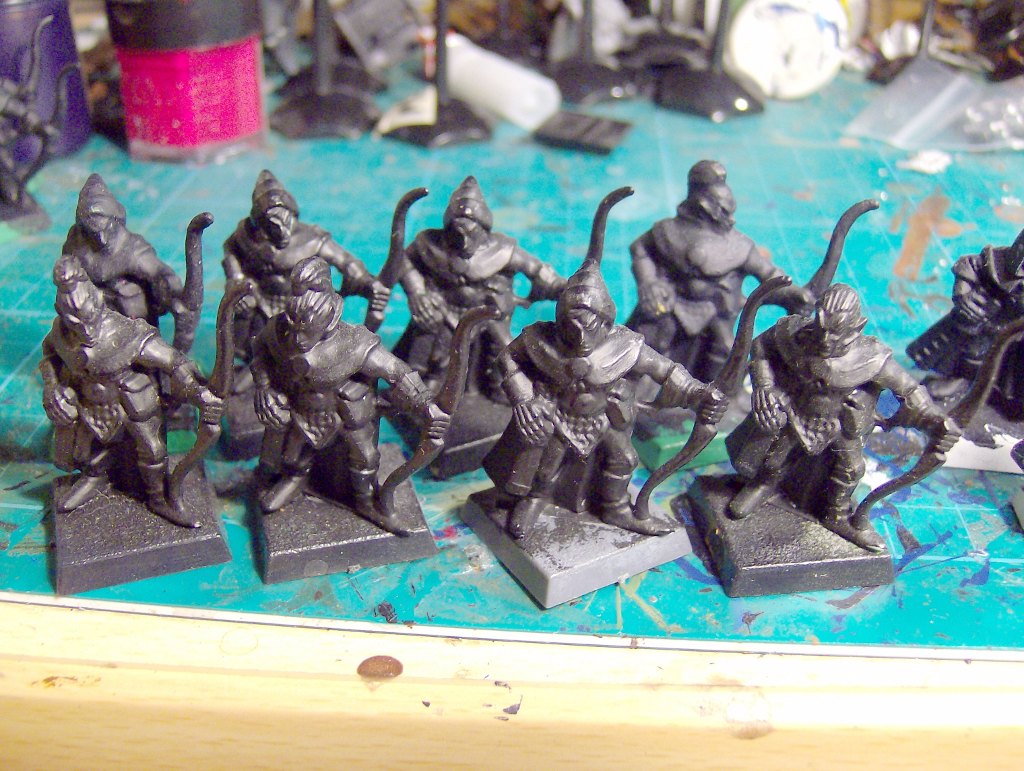 So the Wood elves pictured above are originally from the “FantasyRegiments” Boxed set, put on sale in 1985-1988.  Now if that isn’t oldschool then nothing is.   The £10 Box Contained 60 figures in total, the only downside being that these were 10x orcs, 10x Goblins, 10x Dwarves, 10x WoodElves, 10x DarkElves and 10x Skaven.  Although most people would ask themselves today who on earth would buy such a product, the thing to remember is back in the 80’s the wargames industry was a lot smaller than it is today, and the machining process to make the moulds for plastic injection was a lot more expensive.  If you could only get credit to buy 1 mould then you wanted to cover as many potential sales as possible, besides players would swap spare models between them, and the 1st and 2nd editions of WHFB for which these were designed were a lot more suited to oddball alliances and  converted figures.   Lastly kids, remember that £10 was more than enough to feed a family on for a week in 1985. 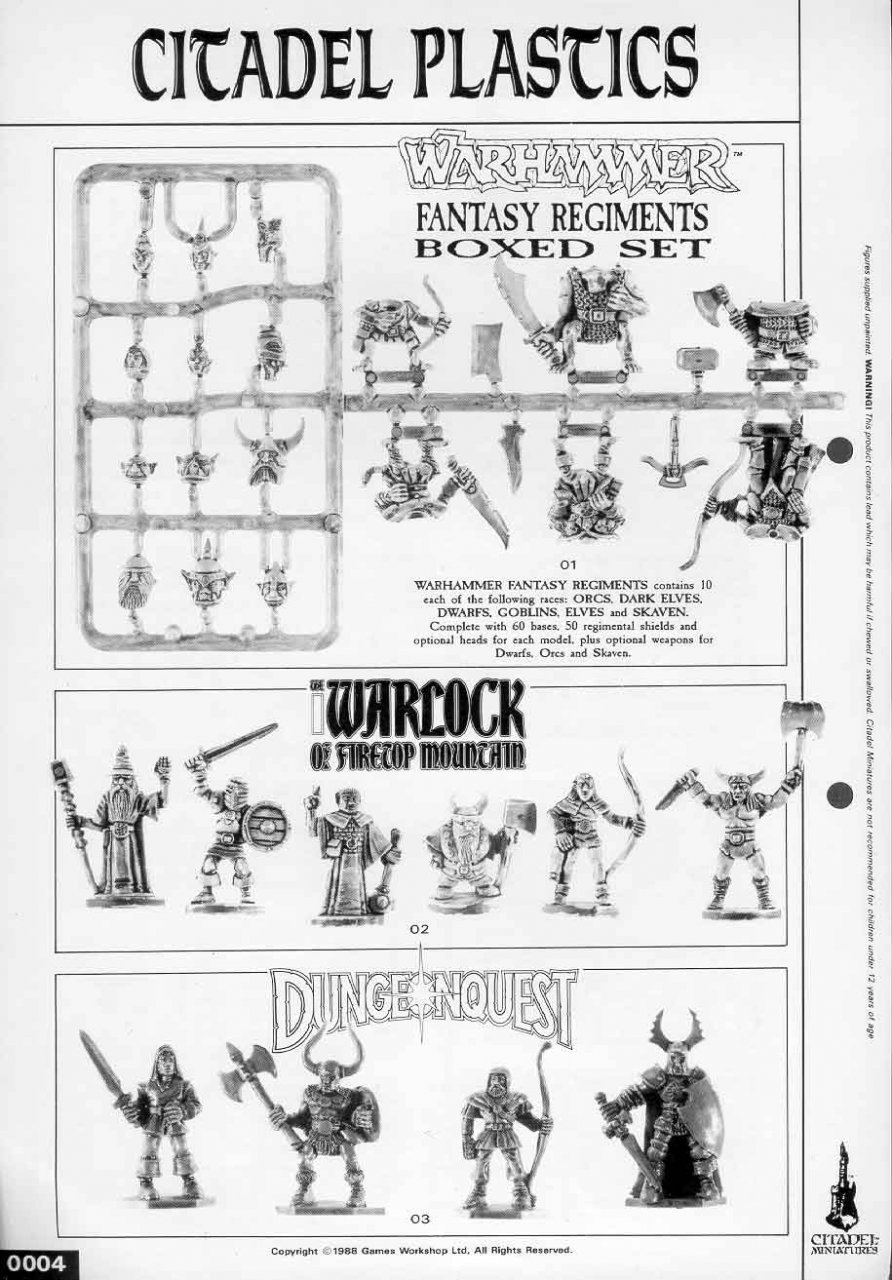 For the good guys I wanted to avoid mixing models on stands, I made a point of keeping good-guy stands uniform and the bad guys a bit more mixed up, however I was willing to make an exception for the wood elves.  To mix in with the 1st / 2nd edition plastics above I picked the 4th Edition Plastic wood elves pictured below to mix in, if anything to show “wood-elves through the ages” on the table.  These plastics were 1994-1996 if I recall, but kept the classic pose set by their predecessors. 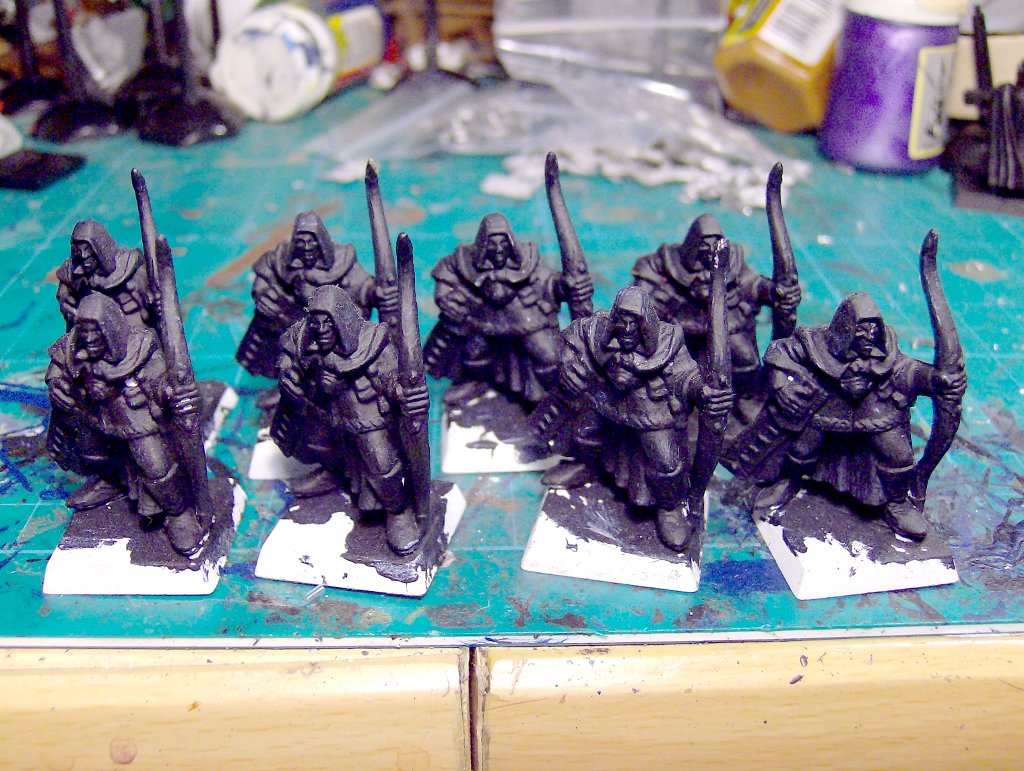 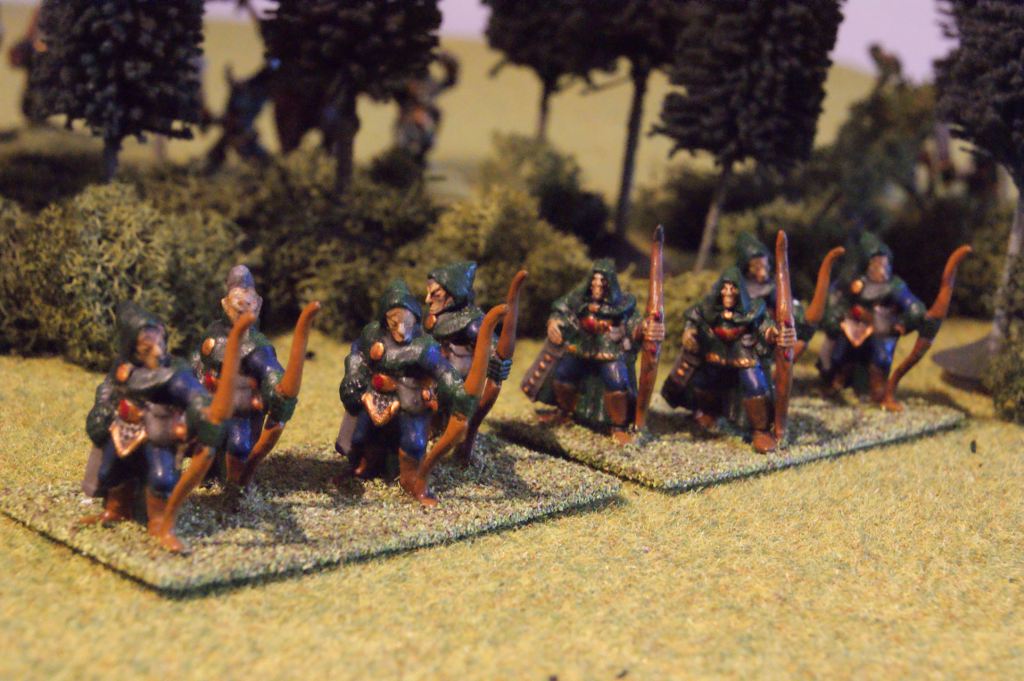