In the first edition of Hordes of the Things, Warband was definitely the worst troop choice going.  At twice the points cost of Horde it was only slightly more combat effective.  Thankfully in 2nd Edition they were buffed slightly, and the semi-official-unofficial errata to the HoTT rulebook brings them up further so they are in-line with other units of the same cost.    Warband now is faster than other infantry types, and benefits from a supporting rank to represent impetus (using the same rules mechanic as spear), this makes them great for swift attacks to the flanks of formations, as well as being able to pull away from fights that may not go their way.  In order to nerf bow units which seemed to me a little overpowered, I gave Warband a Quick-Kill against bow to go with their Quick-Kill against Blade.  This should bring this once neglected troop type to the centre of smashing the Good guy’s Army, which are based heavily in Blade and Bow units.

First up choosing models for Warband was a little trickier than other unit types.  By its description its “Impetus Infantry” fast moving units in open formation, like Celts or Norse berserkers.  I nearly went out and brought a box of Celtic tribesmen from warlord Games to act as warband, but this went against my ‘On a budget’ mentality for recycling old figures.  Shame really, the Celts would have looked great, like the wildmen who fought for Saruman in Lord of the Rings.

So, going back to the Ebay heap, I started out with the Bugbear models from the D&D board game.  There were originally earmarked to pad out the Horde units, but they were chunky enough models to be made something special.  These are moulded in that horrible cheap soft plastic (Not Hard styrene like proper figures), so you have to work at not having paint just fall off, I ended up using spray primer to coat these just to get a surface for paint to bond to. 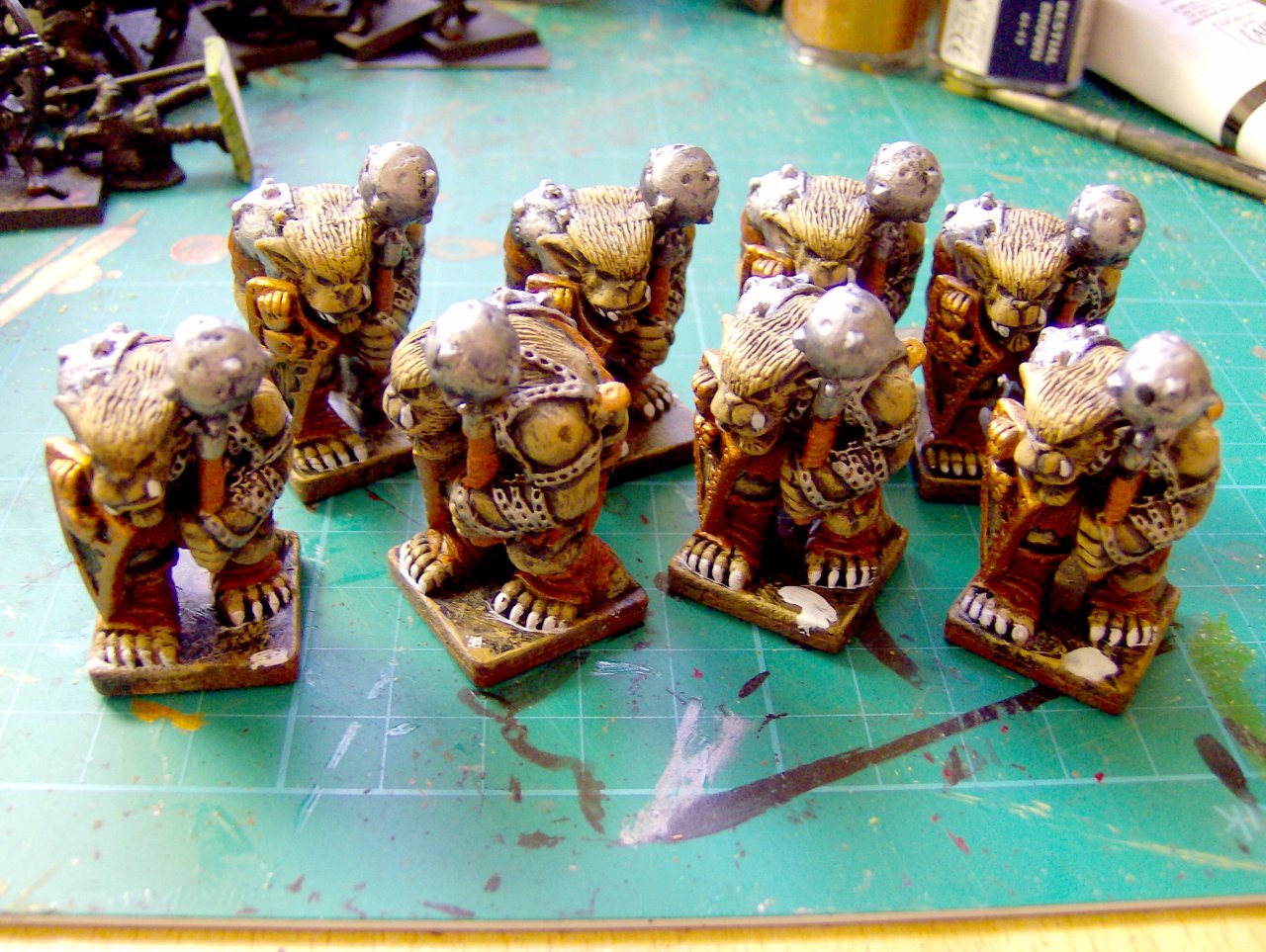 The rest of the colours were hand mixed on a pallet from artists tube acrylic (At this stage I was unable to afford proper miniature paints), so I cant provide a painting guide.  However the one trick I used was watering down black paint till its as thin as milk, and painting round the edges of things.  Much easier than shading and looks great from a distance.

After the D&D Furbolds, I moved onto the Famir from the heroquest Box.  There are few models GW ever made that put a smile on my face as much as these guys do.  In Heroquest the Famir were the first “Proper” monster you fought, and I have childhood memories of the hard fought battles to get past these.  Although they were lumped into the “Greenskins” category, they were in-fact unrelated to Orcs, and GW published some fantastic background for them in White Dwarf for 2nd and 3rd Edition Warhammer.  However they were written out of the Warhammer background in 1991-1992 with the release of WHFB 4th Edition.  Putting these guys back on the table after 20 years in someone’s attic would be a pleasure.  The Models I got were in terrible condition, and the ones from my childhood copy of HQ were not much better, these suffered from weapons and tail breaks a lot.  I Did the best repair job I could with current plastic weapons, and tried to stay true to the original background with colour scheme.

Last up for the Warband units were the Black Orcs, if I recall these were released around 1994-1996 for the Chaos Dwarf army.  Again I Picked up a dozen from Ebay, and threw a few Toms way for WHQ, and painted the rest up as best I could.  Again I used the water-thin black paint for black-lining around edges, it seemed the best way to work when faced with a very dark green as the starting colour.