Blade represent high quality well drilled infantry, moving in tight formation. For this reason they are slow (Equally in Bad going or in the open), but do very well in combat against other foot units (+5).  The are vulnerable to Mounted units however (only +3).  They are Quick-killed by Warband, but in a straight up fight this is unlikely (Warband is at +3 vs Blades +5).  Both Cavalry and Air units are perfect for disrupting blade, if they can force the blade element to turn out of formation and then be overlapped.

Both army lists get Blade, mainly due to the plentiful models, however this may have been a poor choice.  Given a Blade vs Blade fight would be a +5 vs a +5, The changes of a kill occurring is 1 in 18, with 17 out of 18 fights resulting in either a draw or a recoil by one of the blade elements.  Naturally this would lead to some very unfulfilling games with 2 Blade-Walls fought to a standstill.  However I figured both sides have enough mobile units at their disposal to stop this stalemate happening. 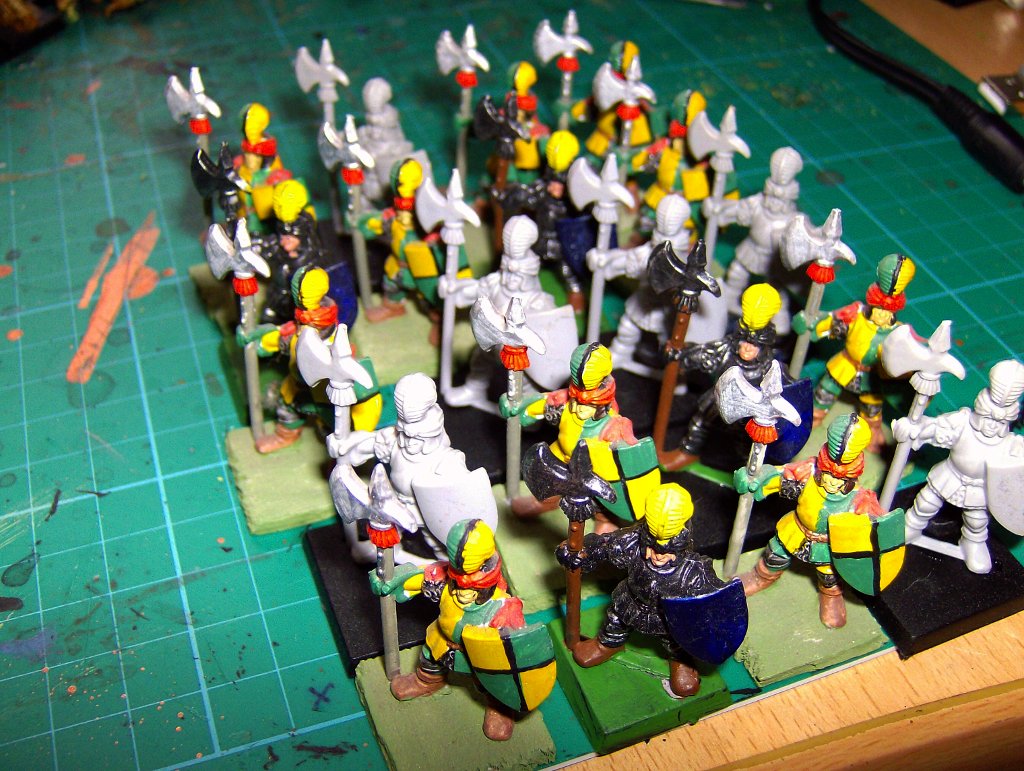 The cheapest models I could conjure up from ebay for Blade were the halberdiers from MB’s “BattleMasters” Game.  The original game box contained 15 of these guys, but batches of 30 or more can be picked up on ebay for next to nothing.  Probably one of the better quality models from Battlemasters the ones which arrived on my doorstep had already been painted (In the loosest possible sense of the word).  Normally I would strip these with powerspray and repaint, but given the number of figures I had to do for this project I just went ahead and painted over the 1st coat. 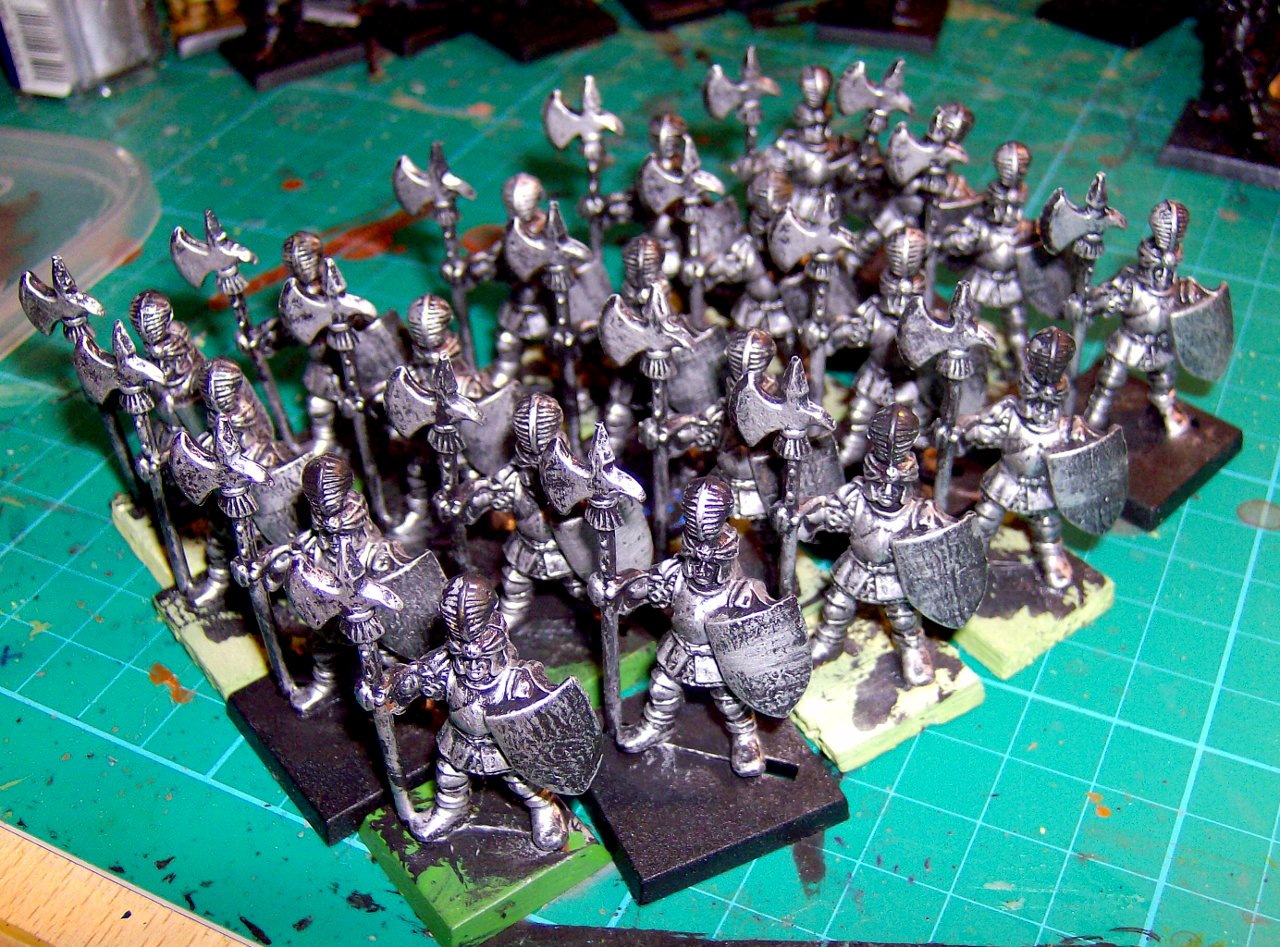 These were First Painted with Process Black tube acrylic (about a tenth the price of GW chaos black and covers much better).  They were then Drybrushed with GW Boltgun metal 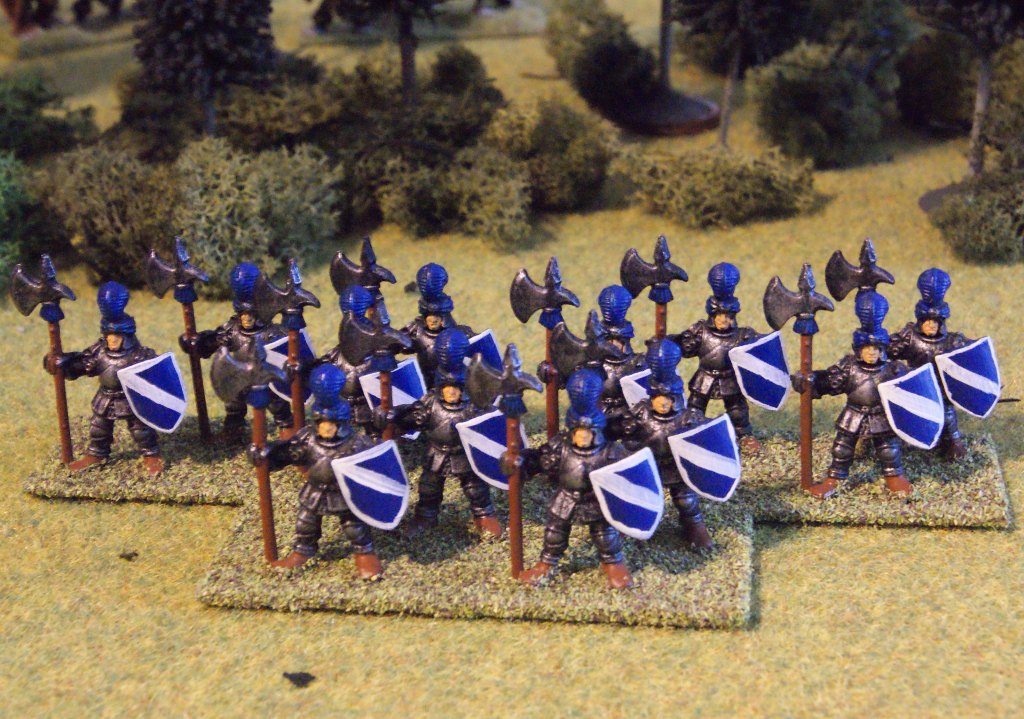 Further Detail was picked out with Tube acrylic “Process Cyan”, which had been watered down.  This allows the silver underneath to shine through slightly, giving the appearance of highlighting.  Shield insignia was picked out in Process White acrylic, Wooden haft of the weapons was picked out in GW “Beastly Brown”, and faces in GW “Dwarf Flesh”.  Base is Flocked in Javis Scenic Scatter – No.19 Rough Pasture . This was about as little effort as painting 30 guys can get, and they don’t look too bad.  Basically, ANY model looks great if painted black then drybrushed silver.

Now on to the bad guys
Blade is one of the few unit types that both sides get in their Armies.  And finding models for these wasn’t hard. 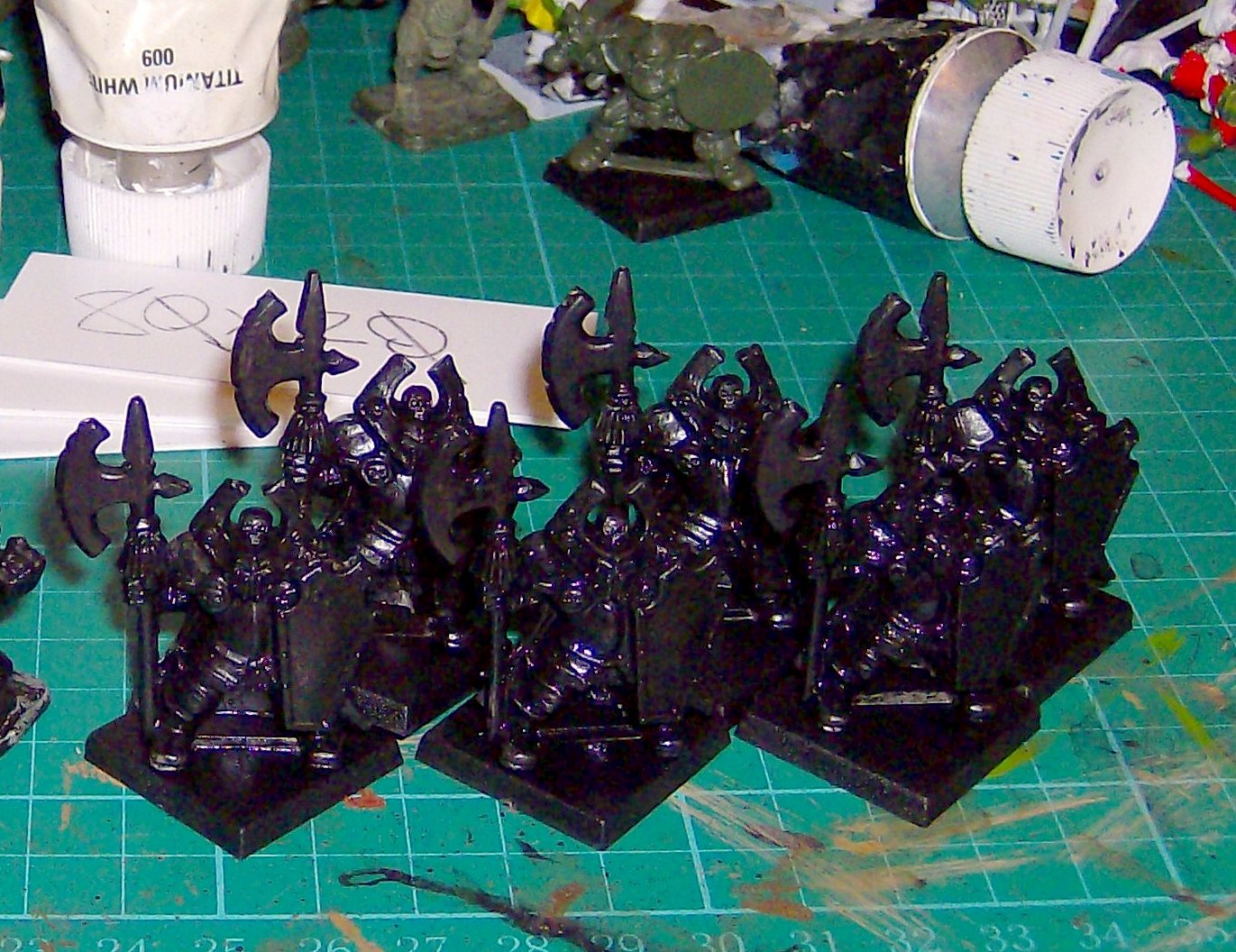 The Obvious choice first up was the Chaos warriors from the Battlemasters Box.  The Battlemasters game contained 10 chaos warriors, but again, extras were not hard to find on Ebay.  I was tempted to use some of the Orc models as Blade as well, but I figured best find a theme and stick with it.  I Nearly Started basing up 20 old Chaos dwarf models to act as Blade, until I discovered how much these were selling for on Ebay. 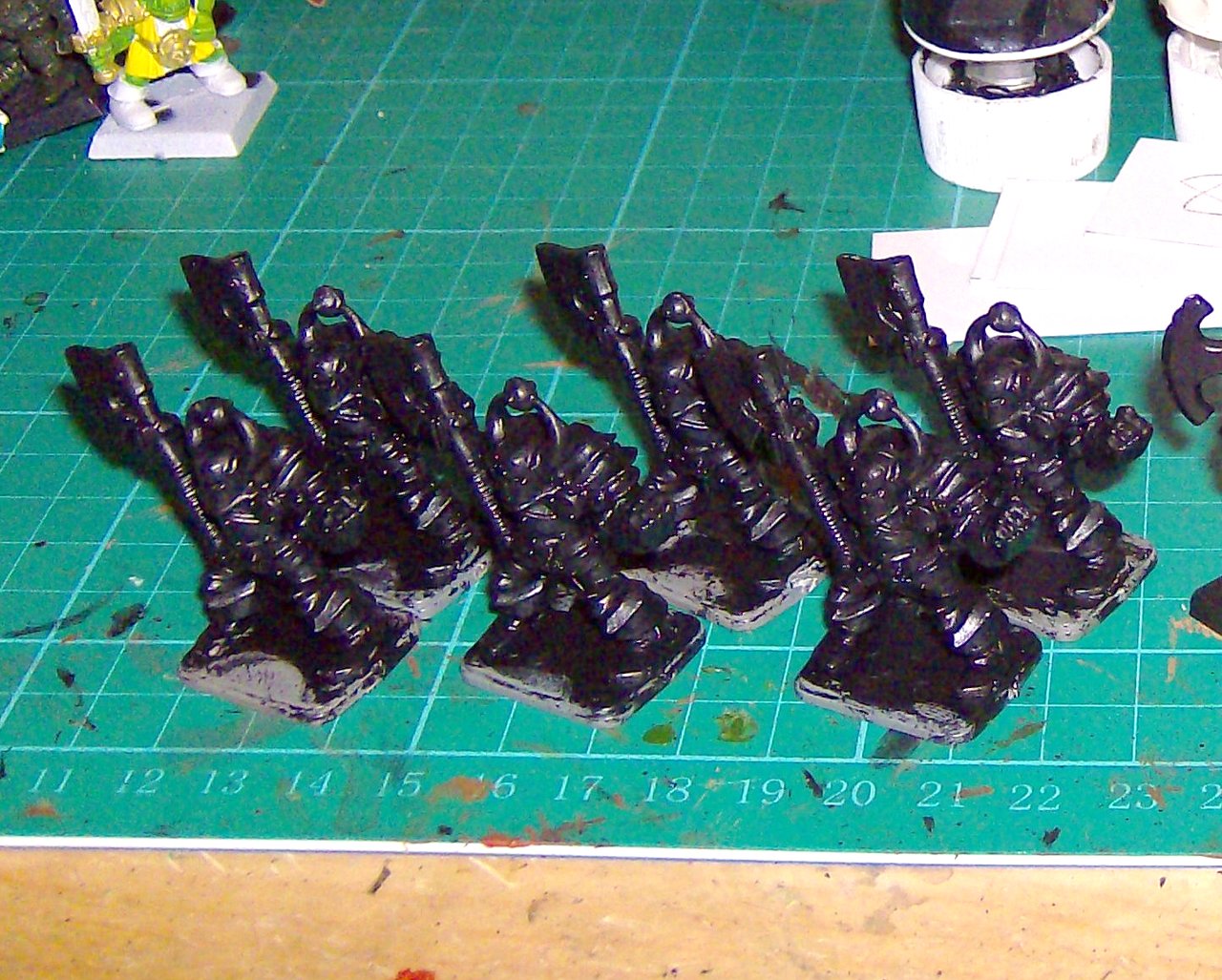 The Chaos warriors from Battlemasters are direct descendants (In terms of Design) from those shipped in MB’s greatest game of all time .. HeroQuest.  The HeroQuest Chaos warrior model is iconic, to say the least, it is the Archetype from which all subsequent “Evil Knight” models are derived.  I Happened to have a copy of Heroquest in my Attic (Left untouched from the 1980’s)  Although incomplete it had a few of these in.  I was more than happy to finally give these guys a new home and see some play after 20+ years in the attic

Painting the chaos warriors was roughly the same process as the halberds, paint black, drybrush silver, and pick out the odd bit of detail in blood-red or dwarf-bronze.  Watering down the red gave me the super-cheap highlighting, and the whole block of 40x chaos warriors took less than 90 minutes to complete.  Now that’s what I call efficient painting. 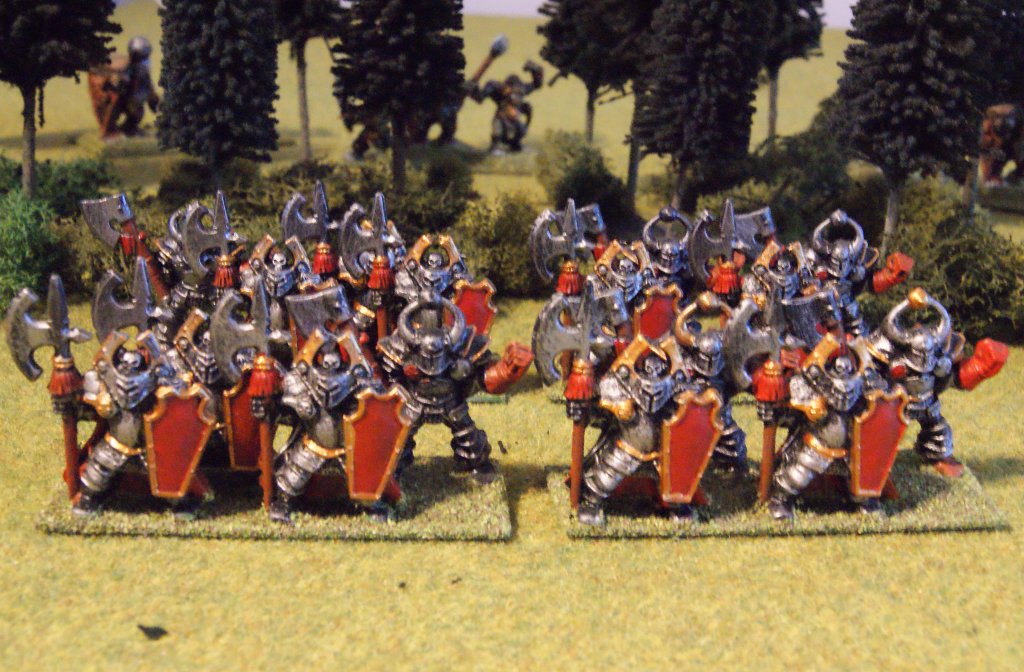 The Beastmen were another classic model, these are from the Games workshop plastics line from the mid to late 90’s, I managed to get 30 of these on ebay for £3.80, but they were missing the shields and had some broken weapons (they were also painted by some kind of retard)  .. I threw some of the better conditioned ones at Tom for use in his Warhammer Quest project, the remainder I repaired using shields from the latest range of beastmen, 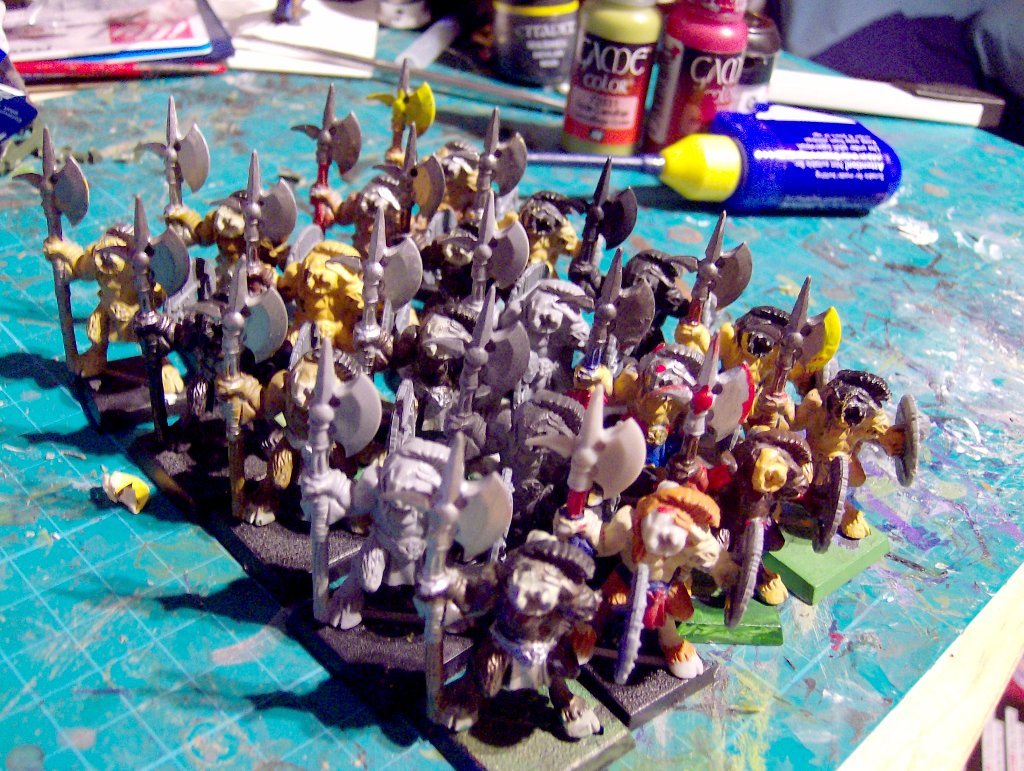 As far as painting goes on these, it was again a simple case of painting black, drybrushing brown, and picking out the odd detail in bleached bone and blood red.  These were some of the quickets turnaround units painted, and certainly look good enough to game with. 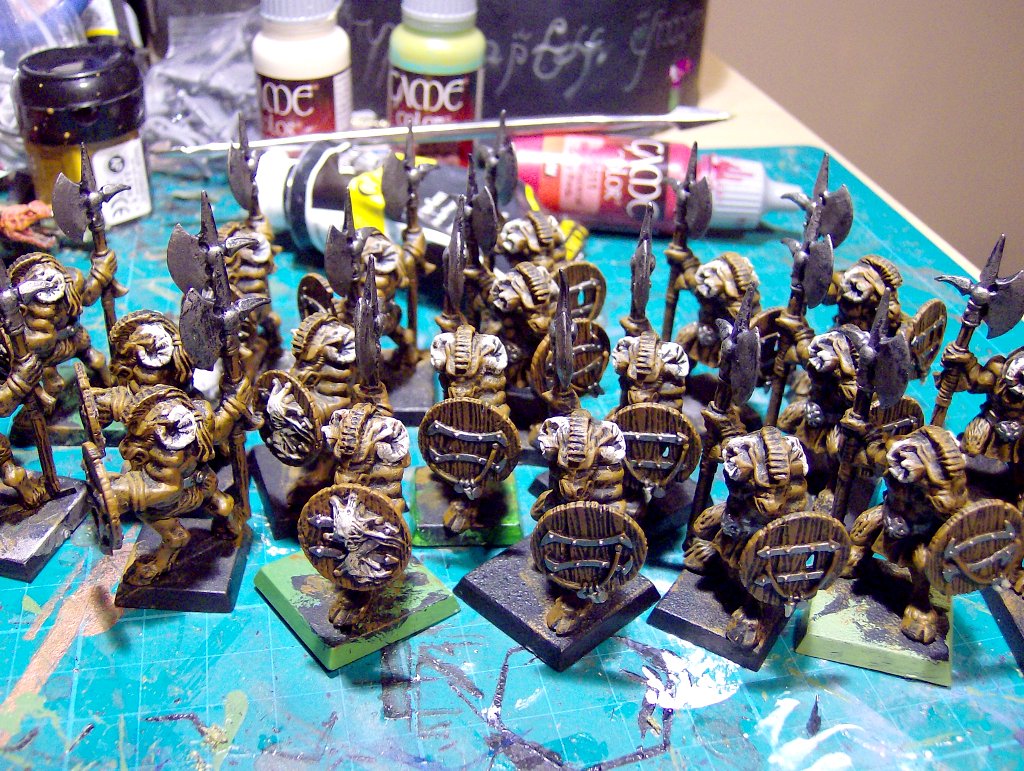 As before, these were based on 1.5mm plasticard and flocked in Javis No. 19