Ok, so now the grunt work begins.  I would sorely love to walk into games workshop and pick up 2x 8000 point fantasy armies to game with unfortunately on my quite meagre paycheque this wasn’t going to happen without t  a lottery win.  The next best manufacturer of fantasy figures is MANTIC games, these guys make a point of manufacturing warhammer scale figures at about half the cost of games workshop.  Unfortunately at thee time of starting this project, mantic had only just put out their range of elves, and had only leaked a few preview “greens” of their undead range.  Although the models look amazing and are cheap, the variety of figures simple wasn’t there.  If I had known how quickly they were going to expand their range I may have waited, but thats life.

Anyway, so I needed hundreds of good quality figures and I needed to get them cheaply.  So the scrounging begins, eBay, Charity shops, and car boot sales. 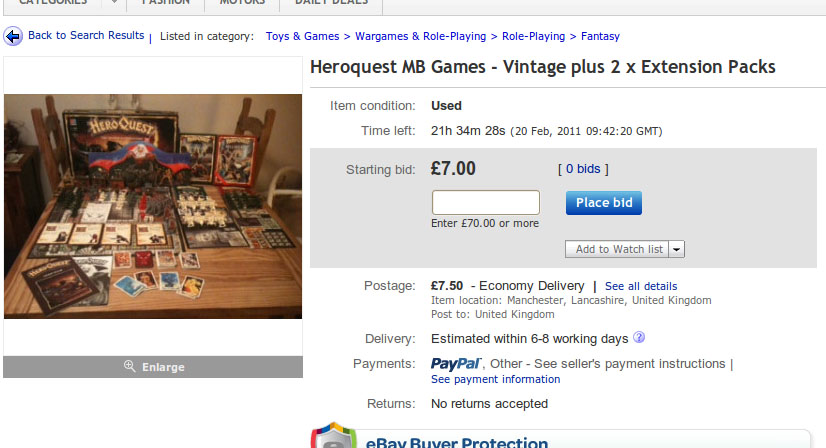 Heroquest, the absolute classic board game for anyone who grew up in the 80’s.  This game contained about 2 dozen plastic citadel miniatures, including orcs, undead, famir, goblins, heroes and all sorts of other oddities.  Some mint copies go for a lot of money on eBay, so the trick is to find the sets with pieces missing,  a patient eBay sniper should be able to pick up odd lots of hero quest figures for under £5.  Remember that if you win a whole box, you can save on postage by asking the seller just to send you the models, and allowing them to re-sell the other parts again.  This is a nice aspect of eBay which played into my hands very well, the peer-review system guarantees excellent customer service and the odd freebie when you buy. 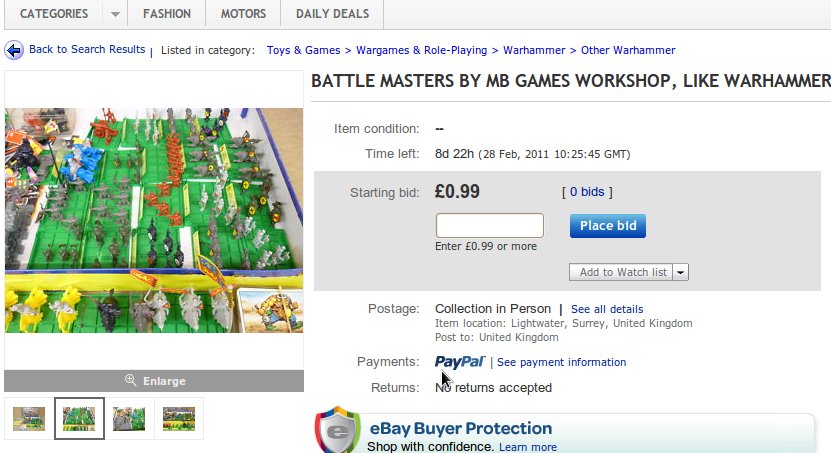 A few lots of heroquest gave us the character models and monsters we would need, but it was going to take ages to bulk out the rank and file of the armies this way.  So enters Battlemasters.  Much like hero quest this was another combined effort between Games workshop and MB games, but on a much bigger scale.  Whereas hero quest was designed to simulate a brave band of heroes storming a dungeon, battle masters was a super simplified warhammer battle in a box.  Containing over 100 miniatures including cavalry and cannons this game was HUGE in scale, and was mass produced to be affordable to most families.  I owned a copy of this, and although it had long since got butchered for parts in other projects, I recalled the miniatures being of a fairly good standard, so I set about hunting down a copy or 2. 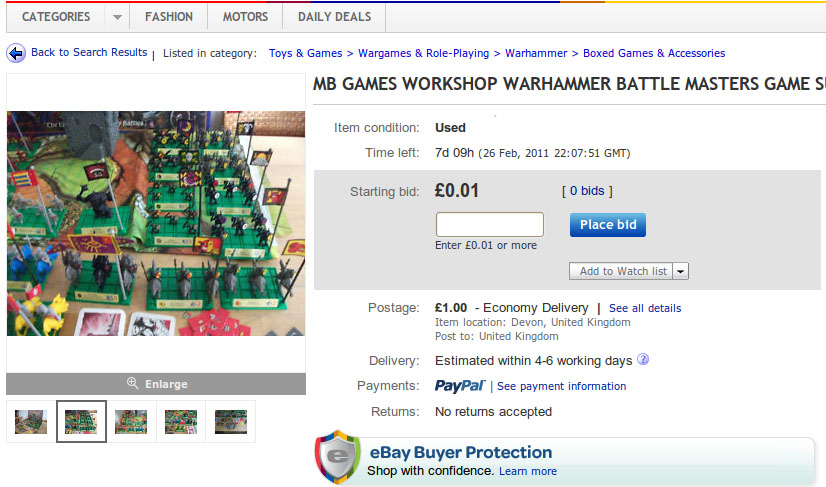 First trick I picked up, if you see an item with 9 days to go and no bids, place a bid.  Most other snipers will hold off till the last minute to bid.  Get in early to discourage other people watching the auction in the first place.  Be prepared to go above minimum bid but don’t loose your cool.  Pay only what you are willing to pay, I lost dozens of auctions by only a few pence, but don’t play into the sellers hands, a bid war can cost you a lot in cash for not much, especially in the heat of the moment.  Set yourself a price-per-miniature and do not go above that for any reason.

The first box of MB/GW Battlemasters arrives from eBay. I have lots of happy childhood memories of this game! 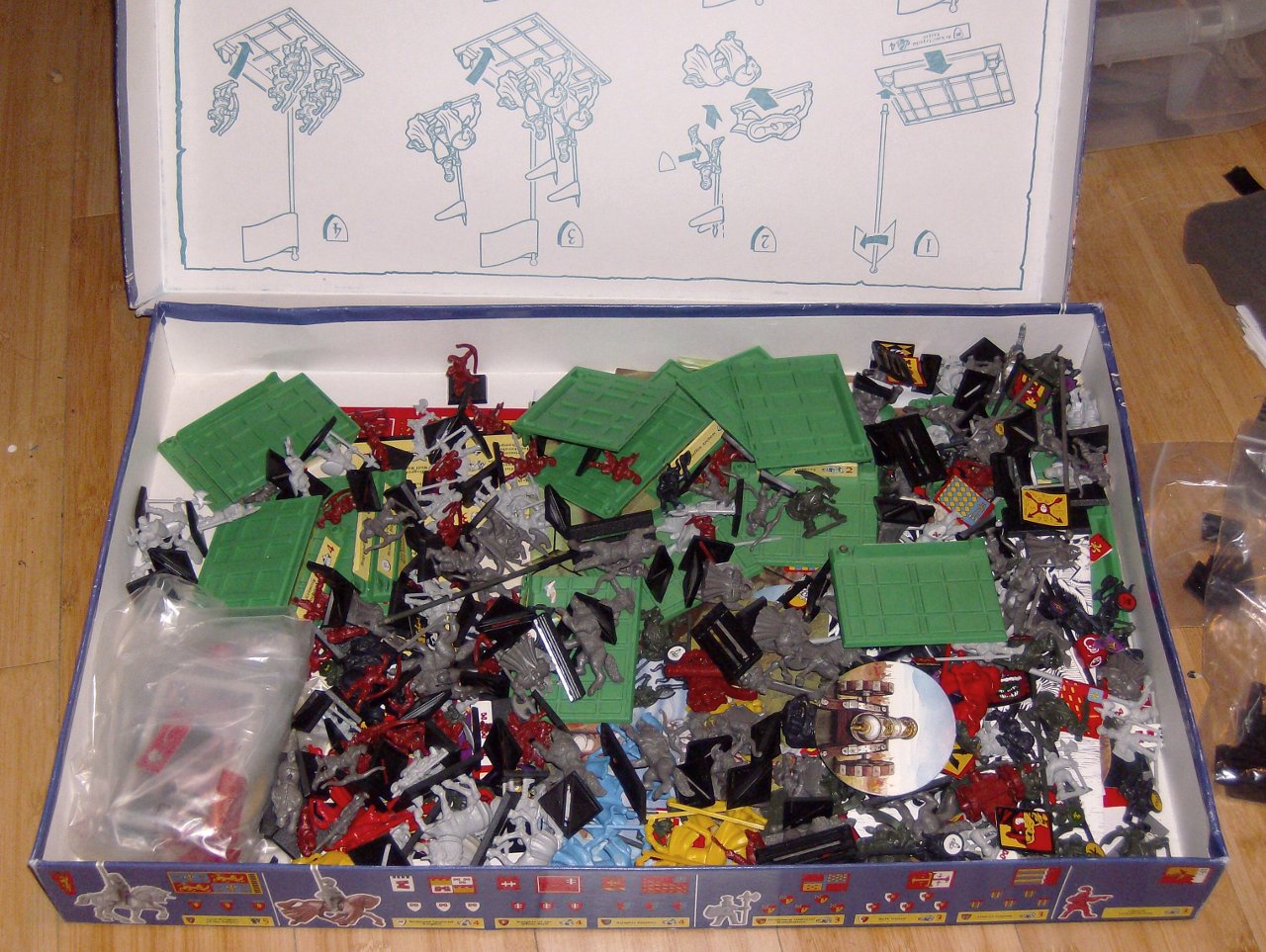 With bundles of miniatures like this available for below the £10 mark, our average price-per-miniature for this project is dropping below the 20p mark. 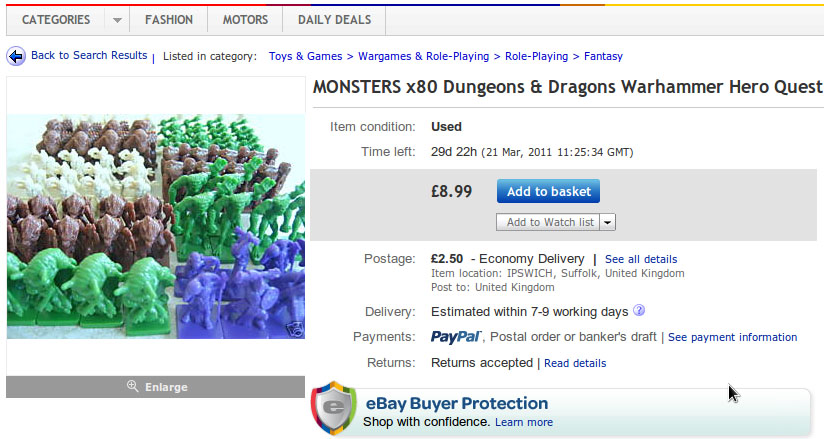 I am not 100% sure what this lot of miniatures was, it claims to be warhammer quest  but  It certainly is not a GW product.  I would suspect these are part of the dungeons and dragons board game by TSR or Wizards of the coats, but I am unsure. Anyway the price and scale was right so in they go.

On arrival the mystery miniatures turn out to be of a much lower quality than I had hoped.  They are cast in that soft bendy plastic that airfix infantry is made from, and were appalling to paint.  However once they had been given a coat or 3 of paint they turned out to be serviceable.  Something to pad out the back ranks with rather than be centrepiece of a formation 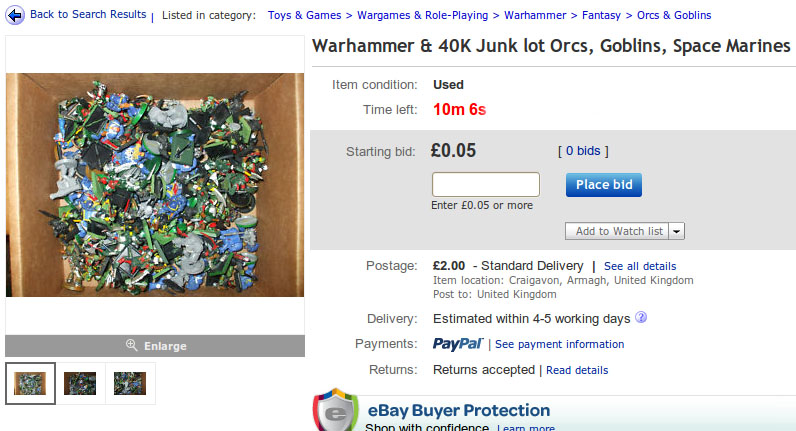 A few other tricks I picked up, firstly search under the root category “job lots and bulk auctions” .. people who don’t know what they have got usually list under there rather than under the normal “wargames and roleplay” categories.  You will have a lot less competition winning these auctions than those correctly filed.   Most importantly, email notification is your friend.  99% of sniping auctions is waiting for your target, so set up some watches on various categories, and check back daily.  You will often find the person who put a £10 buy out on an auction by mistake, not knowing the value of the items they had.  In these cases it’s a race to who can mash the buy button fastest, and auto email notification will help you snap these up before the other buyers.

Junk lots .. The “I feel lucky” button of the wargame world.  Sometimes you will win, sometimes you will loose, but they are mostly worth a go.  Anyone who owns a decent camera and who has the time to sorting these to see what they contain and to re-list them as separate lots cant fail to make their money back plus a bit of profit on the side.

It took about 6 months of eBay sniping to get everything I needed, but both armies came in well below the £100 mark for a truckload of figures.  And this is an ongoing process, you can start cleaning basing and painting figures whilst sniping for more, so its not exactly wasted time.

Now onto the long labour that is paining and army