In Part 2 of this series I showed a photographic walkthrough of the rapid painting process that I’m using for this project, using a 1918 German Battalion HQ unit as an example. The process for painting up the opposing British forces is almost identical, but I thought for the sake of completeness it would be a good idea to do the same with a British unit. This should also provide a second example of the kind of effect you can expect to achieve using Quick Shade dip, for anyone who is considering giving it a try.

I’ve gone with another small infantry unit for the example, this time a British Company HQ unit of 3 figures. In keeping with the fast-but-effective philosophy behind the project, all the products used for this method are straight from the tin. No mixing colours or blending flocks, just a straight-forward, production line.

Since you’ve seen this once already I’ll skip through a few of the steps:

The models, cleaned up and mounted on standard 25mm round bases 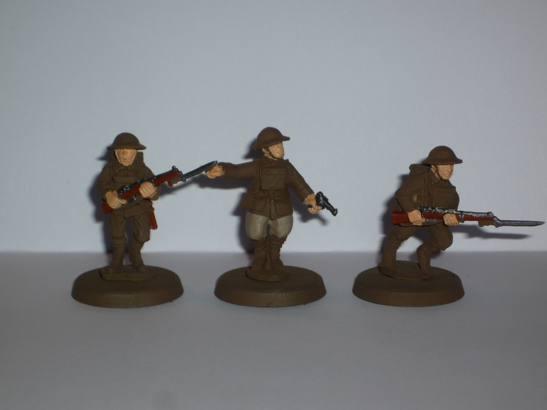 First the models are sprayed brown. I didnt really like the brown shade that Army Painter System do, a bit too “leathery”. Instead I’ve used Humbrol Hobby Spray Acrylic in “Dark Earth”. The finish isnt as nice as the Army Painter System sprays but I like the shade. For the flesh, wood and metalwork areas of the model I’ve used Elf Flesh, Vermin Brown and Boltgun Metal just like the Germans 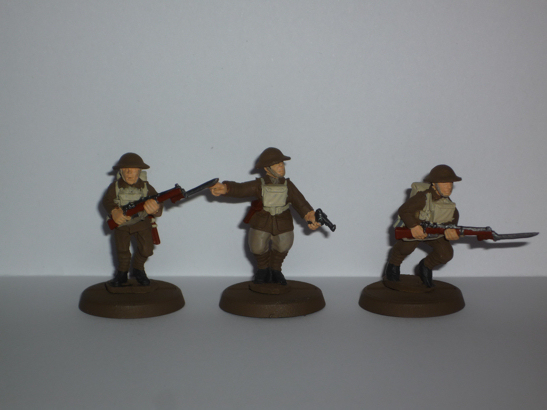 The painting is then finished off with Bleached Bone for the webbing and various other bits done with Charadon Granite, Bestial Brown, Kommando Khaki and Codex Grey.

The bases are then gritted by painting with wood glue, a sprinkle with GF9 Medium Grit, then dipped in GF9 Fine Grit.

The models are then dipped into Medium Tone QuickShade. Once dry, I go around the edge of the base with Graveyard Earth then spray with Matt Varnish to take away the glossy finish of the QuickShade. 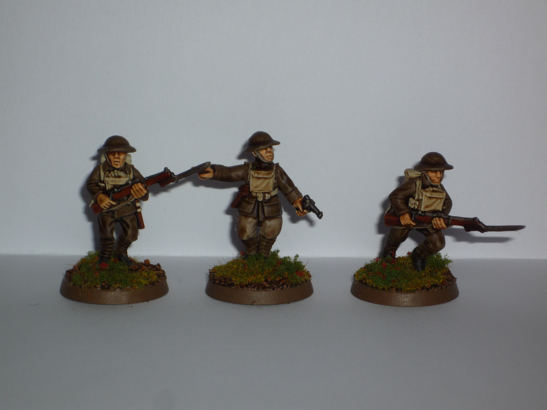 Wood glue is painted on leaving the odd bare patch, then the base is dipped into GF9 Summer Flock Blend. Once dry, a few more dabs of wood glue and some clumps of GF9 Meadow blend finish the job.

That Company HQ was the last of the British that I needed to paint to hit the 600 point milestone. Next article I’ll be taking some photos of the assembled 600 point force and explaining the unit choices. After that, its onto terrain!