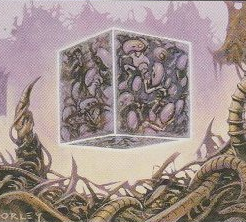 I floated the idea of getting together a cube draft the other day, seemed to go down well with people. So this is sort of what I had in mind.

What is a cube Exactly?

A Cube is a pool of cards from which booster packs are assembled.  The packs are used to draft.  The cool thing about the cube is – you control the selection of cards.  So in a way you are designing your own block.  If you google “mtg cube”, the cube card lists tend to have vastly powerful cards.  However i thought its fun and more achievable to do this with commons, for the reasons explained below.

Peasant – The Cube will consist of only Commons. The reason for this is to challenge people to work out what to do with very limited card pools, and make the game less about lucking out getting the bomb cards.  It also brings the game back down to being fun and a little silly at times. If possible I’d like the cube to be power commons oriented and not too many vanilla cards

Donated – The Cube will consist of Donated cards no one wants anymore. I’m willing to throw in the bulk of this stuff if anyone else is willing to make up the rest. The Cube will belong to the club as a permanent resource, so think of it as a good way of clearing out cards you already have 20 copies of. [card]Trained Caracal[/card] I am looking at you!

Modern – Anything printed with black border and on modern frame is accepted. However I wanted to focus mainly on the following sets if possible.

Generic – I Wanted to avoid cards that rely on synergy with other cards to be relivant.  There is no point putting in [card]Goblin War Strike[/card].  As it relies on a large number of other goblin cards to be relivant to play.   Whereas cards like [card]Ballynock Cohort[/card] are great because they interact with a large number of other cards in the pool, and give players a chance to build coherent decks.

Balance –  Colour wise the distribution of cards would be roughly this: 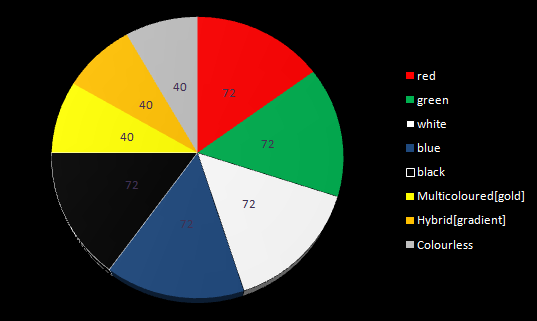 Which gives us a fairly nice balance. Not decided the breakdown of spells, creatures and other stuff in the colours, but should roughly resemble a normal MtG block.  The theme woukld be fairly light, but make each colour very much about its own archetype – Green having more heavy beats and mana tricks than usual – enough control in blue to actually draft control etc.

That is a Total of 480 cards in the cube – which yields 32 packs of 15 to draft with. Enough to support 8 players with 4 packs, or 10 players with 3 packs.  Its also a nice round number to keep track of.  I prefer the 8 player / 4 pack draft for a few reasons.  8 players sets itself up nicly for a playoff tree over 3 rounds, without need to track points.  Also 4 packs would probably be needed to get some of the decks off the ground given the lower card quality.  Lastly 4 Pack draft also helps people learn about downstream signaling and reading what cards people pass over, it also lets people jump ship off a colour later if its over subscribed.

So thats the plan so far … Any thoughts?