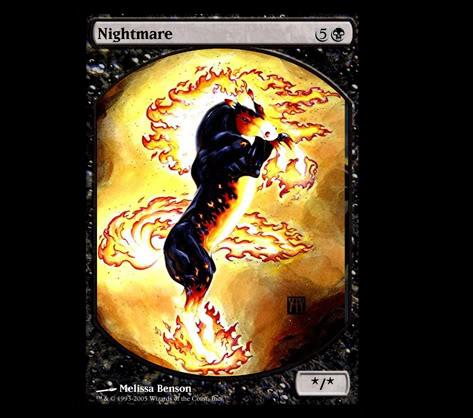 When I saw that [card]Nightmare[/card] and [card]Corrupt[/card] were being re-printed in M14, it gave me the idea to create a Mono Black deck. I’ve always loved the cards which can change in power depending on certain conditions (Cards like [card]Crusader of Odric[/card]) simply because you can get so much value from them. For instance, take a look at [card]Essence Drain[/card]; 5 mana to deal a fixed 3 damage and heal you for 3. Now take a look at [card]Corrupt[/card], costs 1 extra mana but in a mono black deck it will do 6 damage off the bat and heal you for 6. Not only that but as the game goes on for longer it will get more and more powerful. It could also be your win condition if the game ever gets to a point where you have 20 swamps out on the field. The idea I had for the deck would be to control the early game using removal spells like [card]Doom Blade[/card], [card]Murder[/card] and [card]Quag Sickness[/card] and then drop a massive [card]Nightmare[/card] or [card]Corrupt[/card] to win the game. [card]Liliana’s Shade[/card] is also a must in this deck to fetch swamps and also to give all our spare mana to. Orzhov also provided my deck with a staple card in the form of [card]Crypt Ghast[/card] which means that I can pump my shade twice for each swamp and also allows me to cast [card]Doom Blade[/card] for B. This is the current decklist that I am using for this deck: [deck title=Mono Black Control] [Lands] *24 Swamp [/Lands] [Creatures] *2 Crypt Ghast *4 Lilianas Shade *2 Nightmare *2 Sengir Vampire *4 Shadow Alley Denizen *3 Vampire Nighthawk [/Creatures] [Instants] *4 Doom Blade *3 Murder [/Instants] [Sorceries] *2 Corrupt *3 Mutilate [/Sorceries] [Enchantments] *4 Quag Sickness *2 Underworld Connections [/Enchantments] [Planeswalkers] *1 Liliana of the Dark Realms [/Planeswalkers] [/deck] I’m going to be roadtesting this deck at the Games Day on 11th August so I will make another post after that and talk about how the deck performed. EDIT: Part 2 is now up http://specialfrieddice.com/node/232