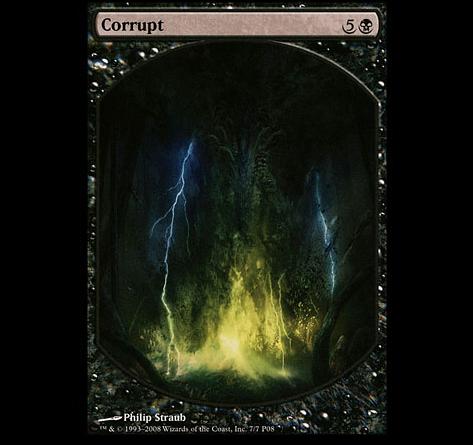 Just got back from Games Day so now I will share the results of my MBC deck. I had to substitute a couple of cards on the day because I didn’t get an order I was waiting on unfortunately. I was missing one [card]Crypt Ghast[/card] and one [card]Underworld Connections[/card]. This is the deck list I ran with: [deck title=”Mono Black Control Revised”] [Lands] *24 Swamp [/Lands] [Creatures] *1 Crypt Ghast *4 Lilianas Shade *2 Nightmare *2 Sengir Vampire *4 Shadow Alley Denizen *3 Vampire Nighthawk [/Creatures] [Instants] *4 Doom Blade *3 Murder [/Instants] [Sorceries] *2 Corrupt *3 Mutilate *1 Sign in Blood *1 Diabolic Tutor [/Sorceries] [Enchantments] *4 Quag Sickness *1 Underworld Connections [/Enchantments] [Planeswalkers] *1 Liliana of the Dark Realms [/Planeswalkers] [Sideboard] *2 Ultimate Price *3 Devour Flesh *1 Illness in the Ranks *2 Barter in Blood *1 Victim of Night *2 Elixir of Immortality [/Sideboard] [/deck] The [card]Sign in Blood[/card] was OK as a substitute for the second [card]Underworld Connections[/card] but it is only useable once whereas [card]Underworld Connections[/card] can be used on multiple occassions. I replaced the missing [card]Crypt Ghast[/card] with a [card]Diabolic Tutor[/card] because they are both 4 drops and I could use the tutor to fetch the [card]Crypt Ghast[/card] if I needed it. I will now talk about the four games that I played today. My first game was against someone using Golgari colours (G/B). His deck used Undying creatures like [card]Strangleroot Geist[/card] and then used [card]Ooze Flux[/card] to make giant Oozes and also reset the Undying triggers. This was a bad matchup for me because Undying creatures need to be hit with 2 removal spells to die. Luckily though his deck had a lack of flyers or reach so I was able to go straight over the top of his creatures with [card]Nightmare[/card] and [card]Vampire Nighthawk[/card]. I managed to win this game 2-1 in the end. My second game was against a Boros deck (R/W). This deck was a pretty good matchup for me because none of his creatures were black or part black so I had no problems using [card]Doom Blade[/card]. Also, Boros decks rely heavily on having creatures out on the field so my removal spells worked a charm here. I just used spot removal on anything he played and then used a [card]Nightmare[/card] to deal the death blow. I won this game 2-0. My third game was against a deck which was a mashup of Selesnya and Slivers in G/W/B colours. His deck worked by populating the tokens made from [card]Hive Stirrings[/card] and then giving them all sorts of buffs like lifelink([card]Syphon Sliver[/card]), Double Strike([card]Bonescythe Sliver[/card]) and Flying([card]Galerider Sliver[/card]). The first game I managed to win fairly easily by removing all of the important slivers so he just had a load of 1/1s with no abilities. The second game however went on for a long time and got to a point where I was on 6 health and he was on 48 health. I managed to draw some awesome cards off the top, however, in order to stabilize and win that game for a 2-0 victory. My last game was for the mat. Both of us had won all of our games so far so it was all to play for. His deck was in standard Simic colours(G/U) and took full advantage of the evolve mechanic. Luckily for me, evolve is a slow mechanic to get going and my spot removal spells were quick enough to knock his creatures out before they could do any real damage. The first game went pretty quickly. I managed to get out 2 [card]Vampire Nighthawk[/card]s and then use removal on any creatures he played. The second game went better for him. He got me down to 5 and I had him down to 2 before I managed to take the victory. I am very impressed with how this deck worked today and I am going to use it until September when most of the good cards rotate out. Thanks for reading my first two articles about this deck. I am thinking about making a sliver deck so i’ll make an article about it if I do.