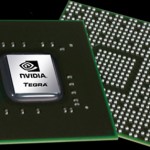 This was a piece I hadn’t originally intended to write, however I thought before modding the tablet I should learn a bit about its inner workings. What I discovered was that the Hannspad is very much a ‘top end’ tablet, which for its low price I find confusing. What follows is a quick breakdown of the spec… The heart of the tablet is the “System on a Chip”, which in this case is a “NVIDIA Tegra II T20”. For those unfamiliar with the terminology, a ‘system-on-a-chip’ is roughly equivalent to all the stuff you get built into your PCs motherboard, that is to say a CPU, memory controller (The ‘Northbridge’ in your PC), and hardware controllers (The ‘Southbridge’ in your PC). The Processor in this case is a Dual Core “ARM Cortex A9”, Identical to the processor in the iPad2. The Memory clock speed of the Hannspad is 667MHz (DDR2), faster than the iPad2’s 533 MHz. However the Hannspad lacks the SIMD processor extensions of the Apple system, which would impact on CPU performance. The Hannspad comes with 512MB of RAM, again identical to the iPad2 In terms of storage; 16GB of NAND Flash memory puts the Hannspad on par with the entry level iPad2. However a Micro-SD slot is provided to expand this should you need (£20 for a 32gb card seems the going rate on ebay) , as well as a USB port which could be used to plug in external drives (Not possible with the stock software, but possible once you have modded it and pulled the right tools down from the market) Graphics wise, the Hannspad runs a ULP GeForce clocked at 333 MHz, which puts out around ~5.33 GFLOPS of graphics processing. For reference the iPad2’s SGX543MP2 GPU puts out around 7.2 GFLOPS. However the Hannspad does have ‘GPU Flash 1.0 acceleration’, whereas the iPad2,for political reasons, fails to provide any Flash support whasoever. Linked upto that GPU is a 1024×600 touch-screen display, which is 16:9 asect ratio. This makes the screen wider but shorter than the iPads 4:3 aspect ratio. So while the Hannspad is better for watching films on, it may prove less effective for ebook use and viewing older tv shows recorded in 4:3 format. In terms of connectivity, 3G is conspicuously absent from the Hannnspad, having only 802.11 WiFi and Bluetooth. For may people this would be a showstopper, but for what I wanted it for, this isn’t really a big loss. If i desperately needed internet connectivity whilst away from home, then I can always use my phone to conjure up a wifi hotspot, or tether it via bluetooth. Besides I am already paying one monthly phone bill with a data contract, I am damned if I am paying a second one for a 3G tablet. Other integrated peripherals you would get on the iPad2 but not the hannspad are a webcam and GPS. Neither of which are showstoppers for me Last up, the software, although its not really possible to compare this to the iPad. The supplied OS is a customised version of Android 2.2 (Froyo), with a bespoke GUI strapped on top, which although clunky, is functional and doesn’t lag. However the killer is the lack of market support, there were a handful of apps i needed for this device to be worth buying, that is support for MKV playback, SSH client, and a CBR reader. Nether of these tasks could be achieved with the supplied selection off apps. Having said that, i would take the gimped version of Android 2.2 over Apples IOS 4.3 any day, because at least the Android SDK is free, and the OS is customisable. Luckily there are custom ROMS out there built on either Android 2.3.x (Gingerbread) or 3.x (Honeycomb). Its interesting to note that the 2.x Series of Android operating systems are built for phones, and the 3.x series are built for tablets, and both are actively supported and developed. It is pretty much up to the user to decide which version to use. At the time of writing Android 4.x (codenamed: icecream sandwich) is under development, which unifies the phone-centric 2.x series with the tablet oriented 3.x series. In conclusion, from a Hardware standpoint, the Hannspad is just a widescreen iPad2 without the 3G connectivity and the picture of a fruit on the back. At quarter of the price of the iPad2 i’ll take one of these and the £450 in my pocket any day.