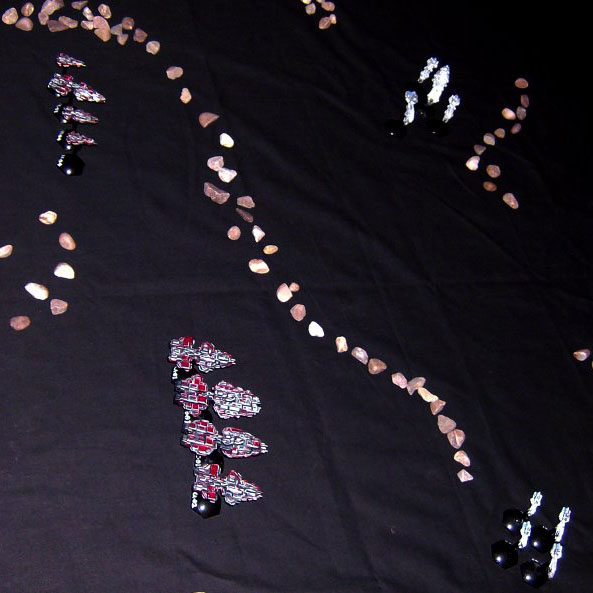 So after much debate Lex and myself sat down to see exactly how terrain would effect ship design in Full thrust.

We both had a few hours to design a 2500CPV fleet. Alex went for Thrust rating 5 ships for the possible 90 degree turning arcs, while i went for a 50/50 mix of thrust 2 and thrust 4. Both players loaded up on class2 beams as opposed to the standard class3, Alex took pulse torpedoes, and i picked extended range salvo-missile racks. The Pulse torpedo was strictly a better choice in terms of dice rolled per turn, but i figured the SMR would be more effective when a players ability to manoeuvre was handicapped. game surface was the standard 8×4 table, Lex laid out terrain and we diced for starting 8foot table edge. Game pace was substantially slower, with dense terrain causing fleets to fragment into smaller pockets of fire-power. Which is exactly what we both wanted from the game. After 3 or 4 turns of manoeuvring, a focused SMR volley ripped the heart out of lex’s fleet. Once the SMRs were spent, lighter ships jumped to FTL, whilst the heaver ones mopped up. Game play was called after 5 turns of brutally 1-sided gameplay.

Moral of the story, next time less terrain or more PDS’s