Dungeons and Dragons – Conquest of Nerath

This game really came out of nowhere at me.  Picked up in TKMaxx for £8 when shopping for some socks, I was soon to face the most fearsome of dungeon denizens, that is to say coming home to a partner and explaining why I had spent more money on games.  As far as she is concerned I may as well have come home with magic beans. But let this story not deter you from buying this game (or beans for that matter).

The game contains a ton of figures.  4 armies worth.  With 8 unit types for each.  Although each army has the same 8 types of unit, the figures are slightly different in different armies, which is a nice touch that could have got  away with not doing, but really adds a lot.

The models aren’t hard plastic wargaming pieces, instead they are soft plastic boardgame style pieces, but that’s not a big deal, what matters is theres loads of them to push round the board. 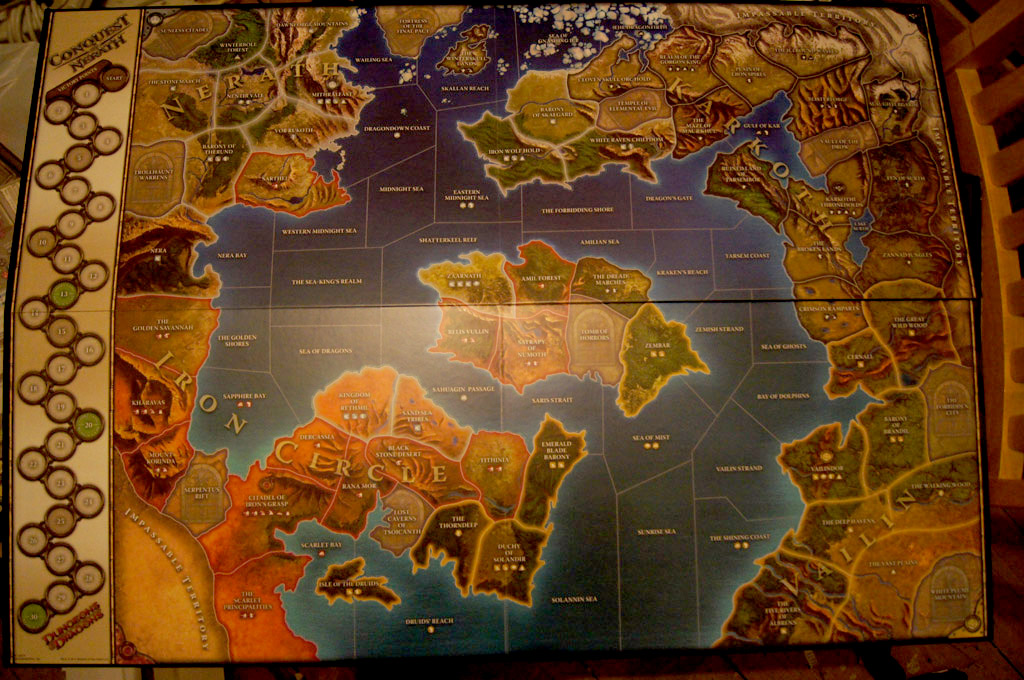 The board itself is also a nice bit of art

The game also contains a host of cards, the same nice smooth playing card feel one would expect from WotC,and counters, which are punched from reassuringly sturdy card stock.

What really makes this for me is the fact the game box has a slot for storing everything post-punching.  This is something that should be compulsory for all board games. 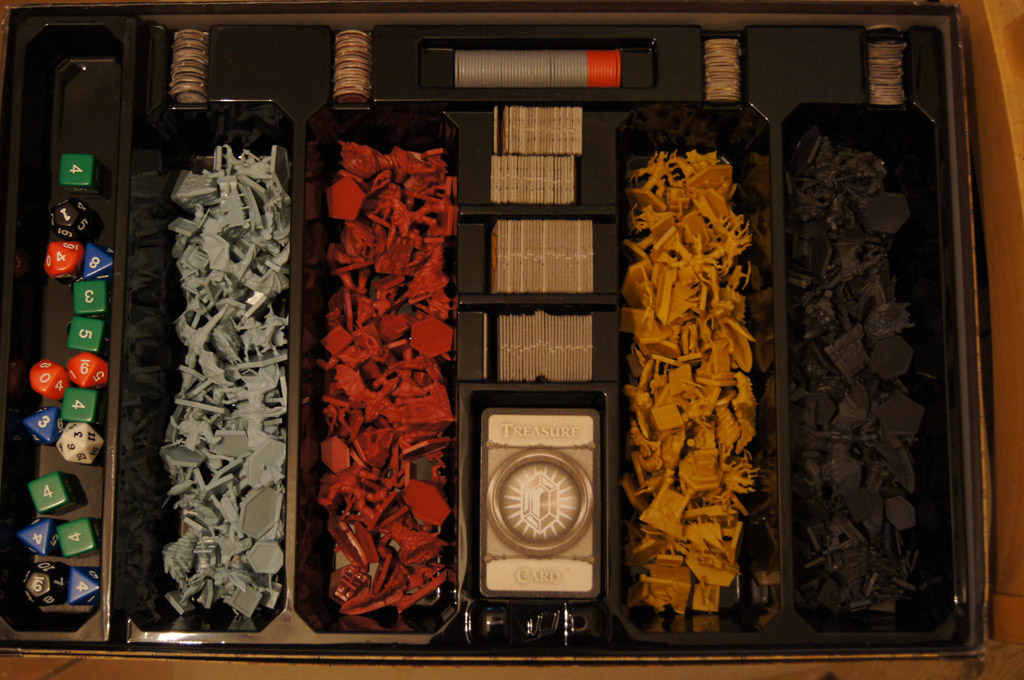 Ok, well this is really two games in one.  Fundamentally its Axis and Allies with Dragons.  And let me just say for the record that’s fine, I have no problem whatsoever with this concept.  The second aspect of the game is a dungeon crawling mechanic which allows certain types of ‘hero’ unit go dungeon farming for epic items to help the war effort.  On top of this are event cards for each of the 4 sides, which customise the way the side plays, adding depth of character and unpredictability to the game.

Also, each game sets up identically, with all 4 armies on the table.  For our first run through we only had 3 players, but the rules catered for this situation neatly, and even included the correctly branded tokens for scoring allied commands (another nice little touch).

In short it’s that quixotic blend of chaotic combat, and grand strategy with low-to-medium complexity rules that really make this game.  It has sweeping strategy, heroes doing heroic deeds, and everyone has a few ‘tricks’ to play to spice up the mix.

The only downsides are a moderate learning curve, a bit of work to set up the game board, but nothing compared to proper historical board games.  Mages are a little overpowered, and some of the evil sides do get a bit of a steamroller going early, which can be demoralising.  But over time the game balances itself out very well, Complaining that Karkoth is overpowered on turn one is a bit like saying in Axis and Allies Germany was a bit overpowered turn 1, yes they are, but ultimately you can deal with it.  Also they probably didn’t have to use D&D style polyhedral dice for everything, but felt obliged to in order to justify the ‘Dungeons and Dragons’ branding.

How does it play 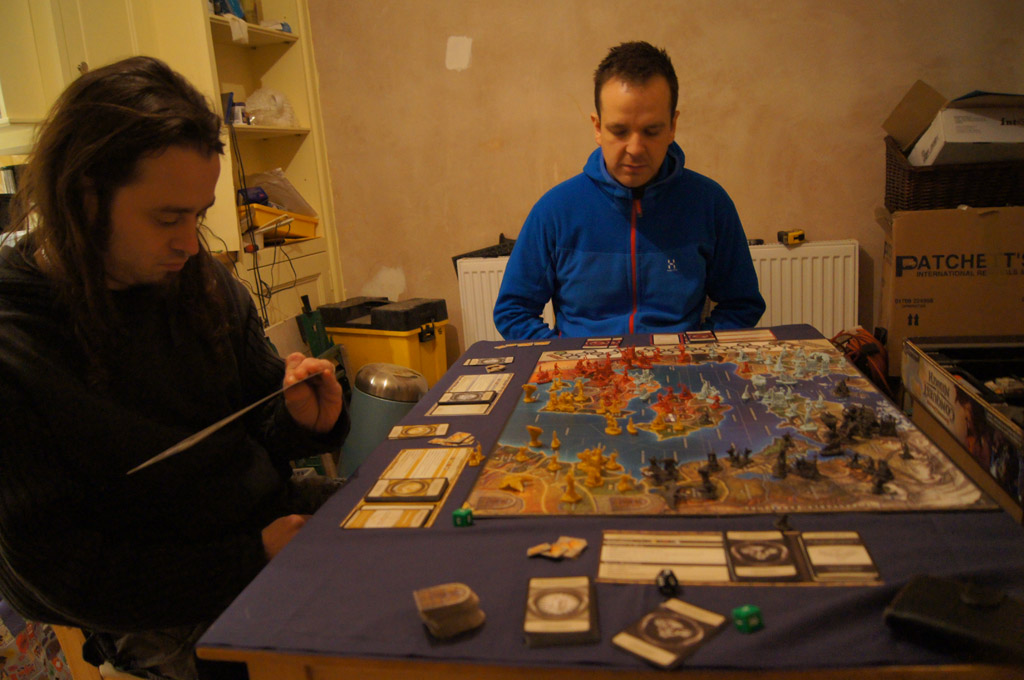 We only had 3 people playing the ‘quick’ victory conditions, but the game ran through nicely, and everyone got a moment to shine and a moment to pick their teeth up off the floor.  Dungeon loot provided a few minor buffs to units, and in the late game generated enough victory points for Tom to win.   The best aspect of  play is the alliance mechanic, and I doubt I would bother playing the game in its all-vs-all state.  Much like Axis and Allies, the 2 alliances are balanced off against one another, and players on the same team are going to have to work together for victory.

Although I picked this one up cheap, now i have played it, I’d say i would be happy to have paid full price for it.  It’s a nicely balanced game, with a visually satisfying layout and enough figures to feel good.  Dungeoneering feels a little ‘bolted on the side’ to justify the D&D branding, but is at the end of the day, a nice bit of fun to break up what would otherwise be another Risk/A&A clone.  Game balance is about right, rules are fairly concise and play tested.  Yup, its a good ‘un.