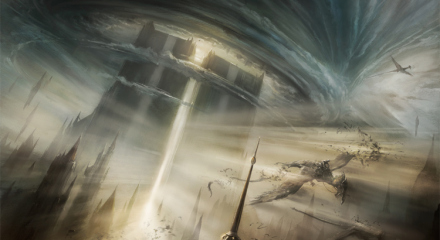 Took this to FNM for 2HG standard, and got a decent result out of the deck [with a little help for the other guy]. Although all the games were very close, and i dont feel like i deserved the wins as much as i would like. Still its the first time i played a control deck in standard since [card]Miraris Wake[/card] + [card]Decree of Justice[/card] was a combo, and this deck was hacked together the night before with no real idea how it would play out. The idea is to go long, using [card]supreme verdict[/card] to nuke any rush. Use the enchant based removal to make [card]Ethereal Armor[/card] and [card]Sphere of safety[/card] playable. [deck title=UW Enchant Control] [Lands] *4 hallowed fountain *10 plains *10 island [/Lands] [Creatures] *4 Judges familiar *4 invisible stalker *2 auramancer *2 Stealer of secrets [/Creatures] [Spells] *4 supreme verdict *4 oblivion ring *4 pacifism *4 Ethereal Armor *2 Sphere of safety *2 detention sphere *4 curiosity [/Spells] [/deck] After playing 3 rounds of 2hg my thoughts are as follows: [card]Judges familiar[/card] isn’t as good as i would have likes, although he is a 1-drop, people didnt play around the threat of a counter as much as i would have liked. Also with 1 toughness he is vulnerable as hell. If your opponent isn’t holding any removal a turn 1 owl, into a turn 2 [card]curiosity[/card] is nice, but dropping enchants on a 1/1 is setting yourself up to be on the wrong side of a 2-for-1 exchange. Also he is a really bad fit for this deck, if you enchant him you loose the threat of the sac/counter. If you are disinclined to enchant him, then he is a poor fit for the deck. On the flip side, [card]invisible stalker[/card] is a trooper. Hexproof and unblockable, means your investment is safe, dropping either [card]curiosity[/card] or [card]Ethereal Armor[/card] on this guy is a great investment. Once those [card]pacifism[/card]s and [card]oblivion ring[/card]s start to hit the table a 4/4 unblockable dude is quite a threat.