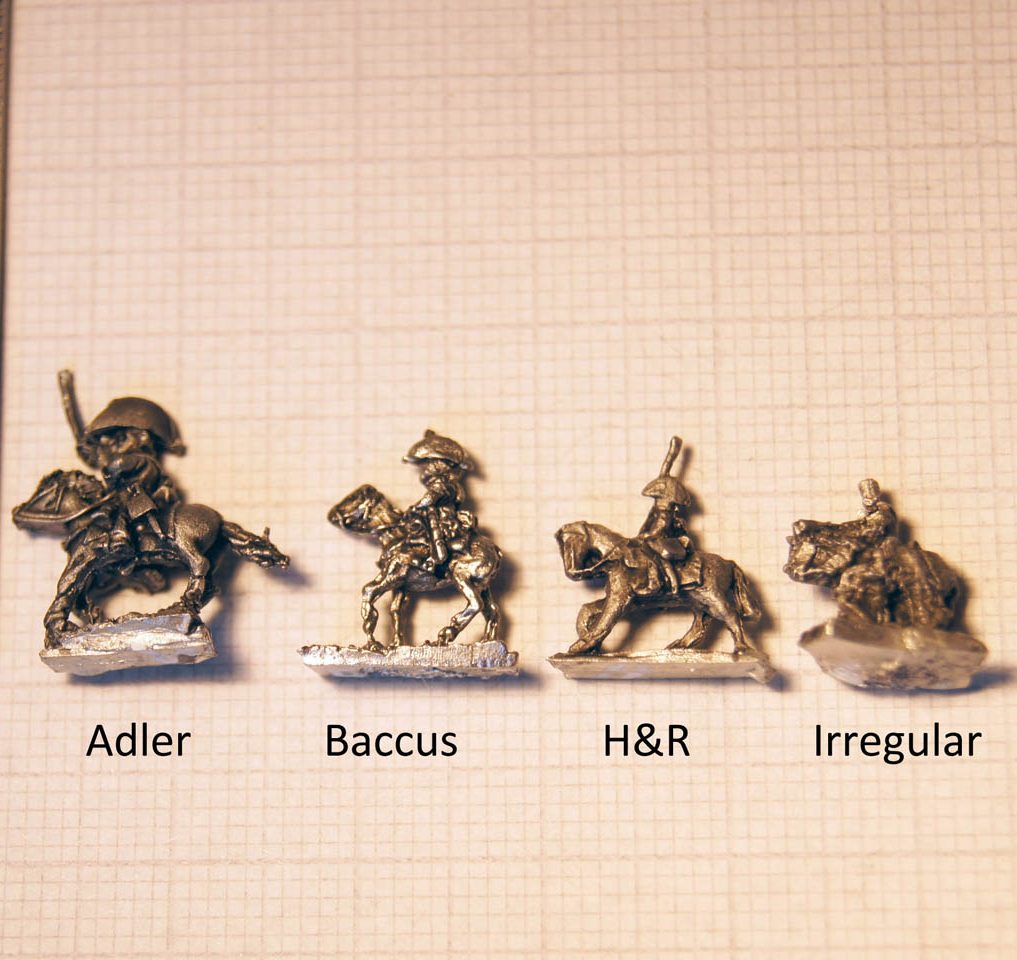 The next wargaming project on the horizon for the group is 6mm Napoleonic using the ‘Grande Armee’ Rules set by Sam Mustafa. There are four manufacturers of figures in the UK, Adler, Baccus, H&R and Irregular, and from what we have seen at shows, there is substantial differences in style between those manufacturers. As we want our armies to look the same in terms of figure sizes, it was important for us as a group to pick a single manufacturer. I ordered samples from all 4, and have put up some pictures, so if any other gaming group is in this same predicament, this may help them pick the supplier which is ‘right’ for them.

I ordered British heavy Dragoons, and British line infantry from each. Models have been inked but otherwise untouched, mould lines and flash have not been removed. /

Adler produce what some refer to as “battle Gnomes”: figures which are deliberately distorted to emphasise heads, hats and weapons. At 6mm scale this makes a lot of sense, as you want to be able to differentiate different uniforms and weapons without needing a magnifying glass. Anyone who is going to get on their high horse [pun unintentional] about historical accuracy should remember that all figure manufacturers do this to an extent, even at 32mm, parts would simply be too small to manufacture any other way.

Their website has an annoying unskippable flash intro, and there is no shopping basket or Checkout functionality. There are no pictures of the actual miniatures in their catalogue. And to order you have to email, wait for a total to be emailed back, then pay by paypal. Normally that’d be enough to make me take my money elsewhere, but as it turns out, that’s par for the course for 6mm wargaming. Having said all that, they were the 2nd Fastest to respond and ship out of the 4 manufacturers, so the system clearly works.

The miniatures themselves are the biggest and most detailed of the bunch. I’m actually quite taken with these guys as they simply ooze detail and character, and would be the most fun to paint of the four.

All models are supplied on a strip, and would require cutting and gluing to a base individually. 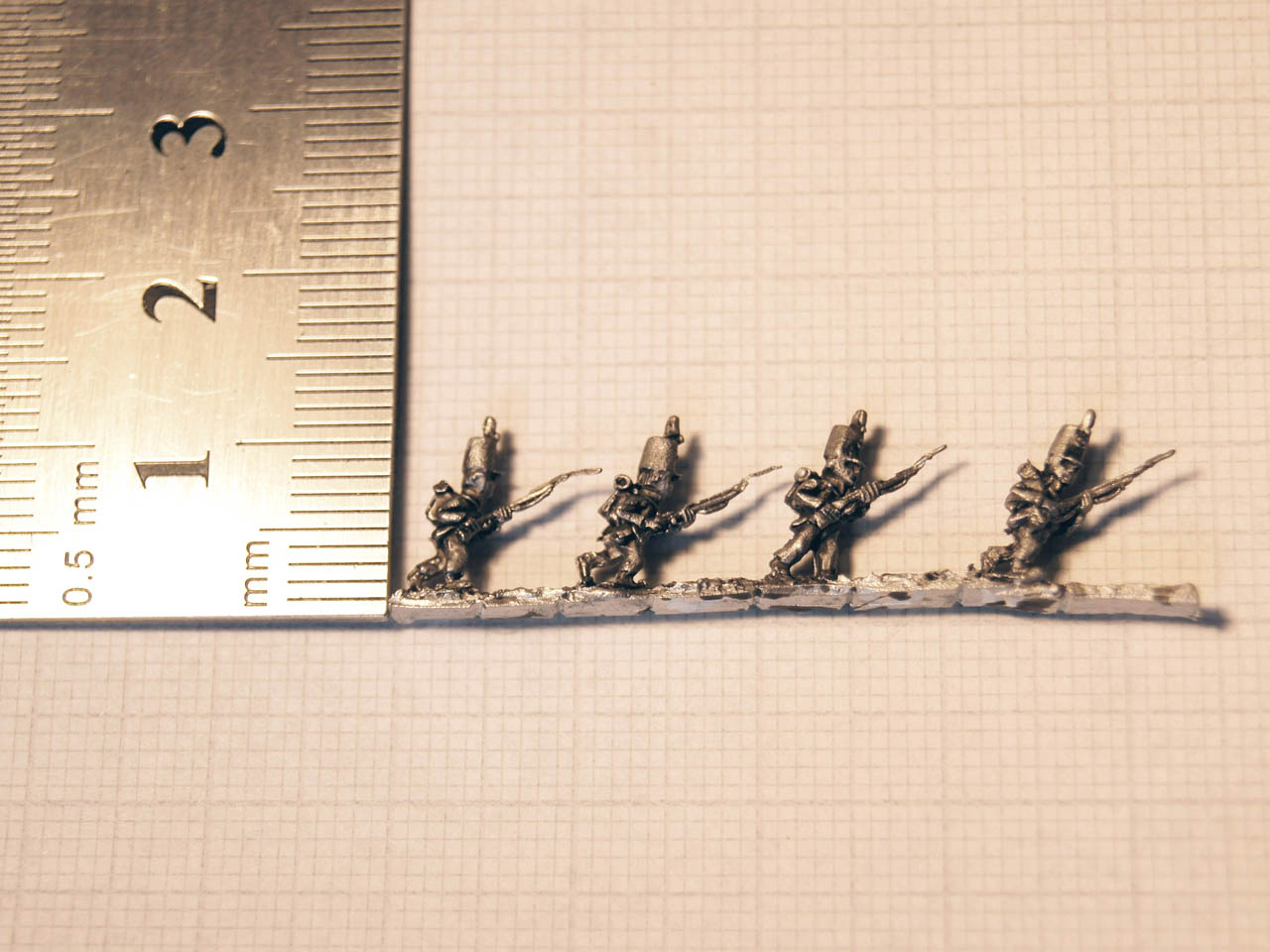 Baccus are solely focused on 6mm gaming, and every year at Salute we find ourselves drawn to their stand in wonder. They have a good range for the period, designed to support their own ‘Polmos’ rules system. However the figures are good for what we need.

Their infantry is based in blocks of four men, ready to be painted and based. Which is much easier than having to cut each man from a strip and glue to the base. However their cavalry are still supplied on a strip, and would require cutting and gluing to a base individually.  These arn’t as ‘Gnomey’ as Adler, but are certainly of that type.

Their website is the most advanced of the four, having a shopping cart but still no real payment system (Total is still sent by email, payment by paypal). Its less clunky to navigate than most, and has some pictures of what you are buying. Still breaks at most screen sizes though.

This figure range used to be owned by NavWar of Seven Kings, and H&R do some amazing Modern and WW2 figures. My local games club recommended H&R highly as they use their WW2 range as a cheaper/better alternative set of miniatures for ‘Flames of War’.

Still no real website, no ordering system, and the catalogue is a PDF file with no pictures. But Customer service was the quickest of the bunch, shipping within a few days.

Models are not strictly 6mm, instead being sold as 1/300 scale. But is close enough for our needs.

Both infantry and cavalry are supplied on a strip, and would require cutting and gluing to a base individually. They have a nice range of poses, and are more realistically proportioned than Adler or Baccus. 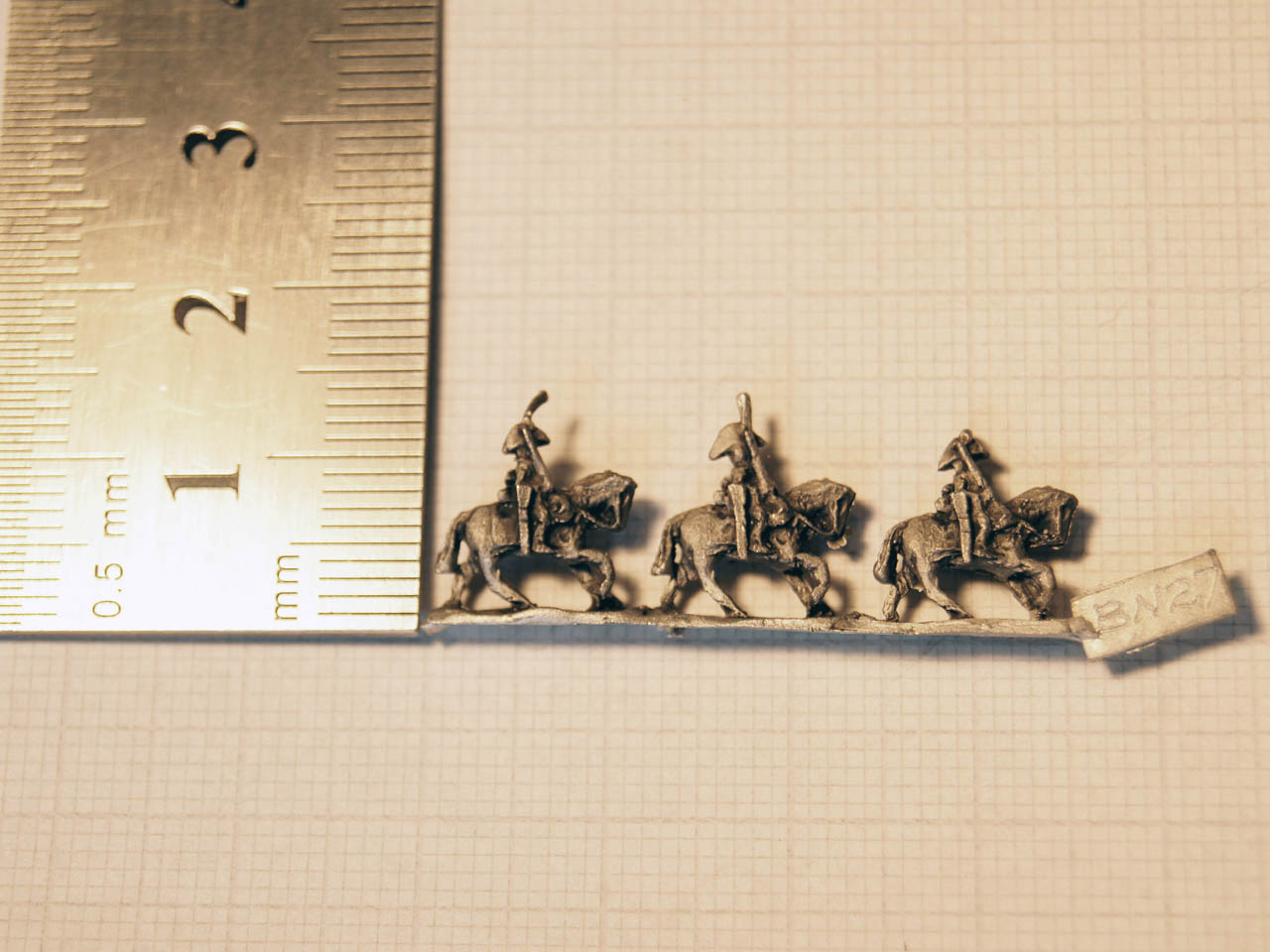 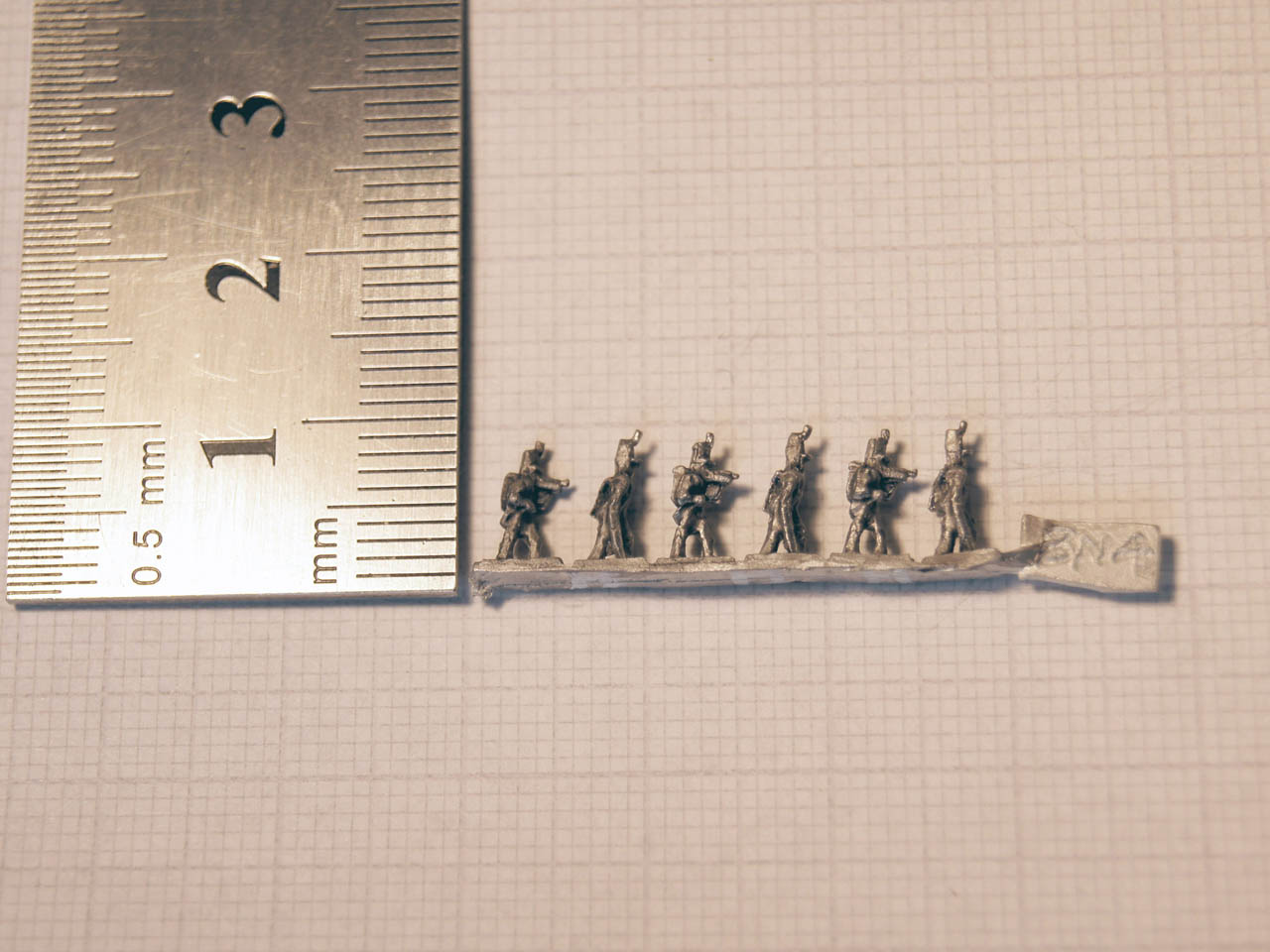 H&R have a nice range of Poses, lending them to Diorama, the strip below has a lot of potential. 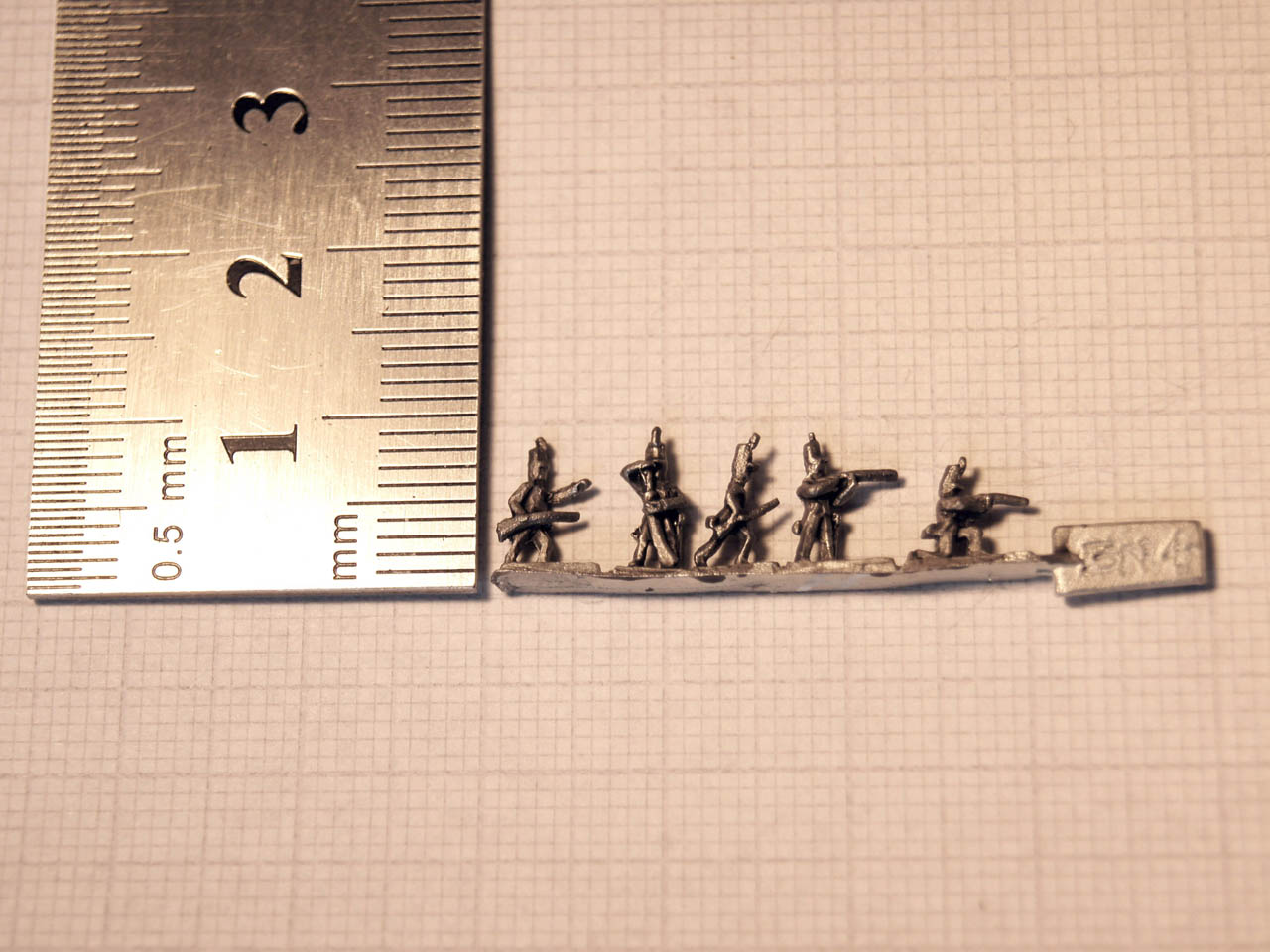 The figures from Irregular are the smallest, but I like the fact that you get 5 men on a strip ready-to-base, and 4 Calvary the same, they are the only manufacturer to do cavalry based in the “Easy mode” way. I imagine these would be the quickest and easiest for our group to paint, as we only really paint to ‘gaming standard’, and none of us are showcase painters.

I have the same issues with their website as the other manufacturers. No cart/payment system, few pictures. 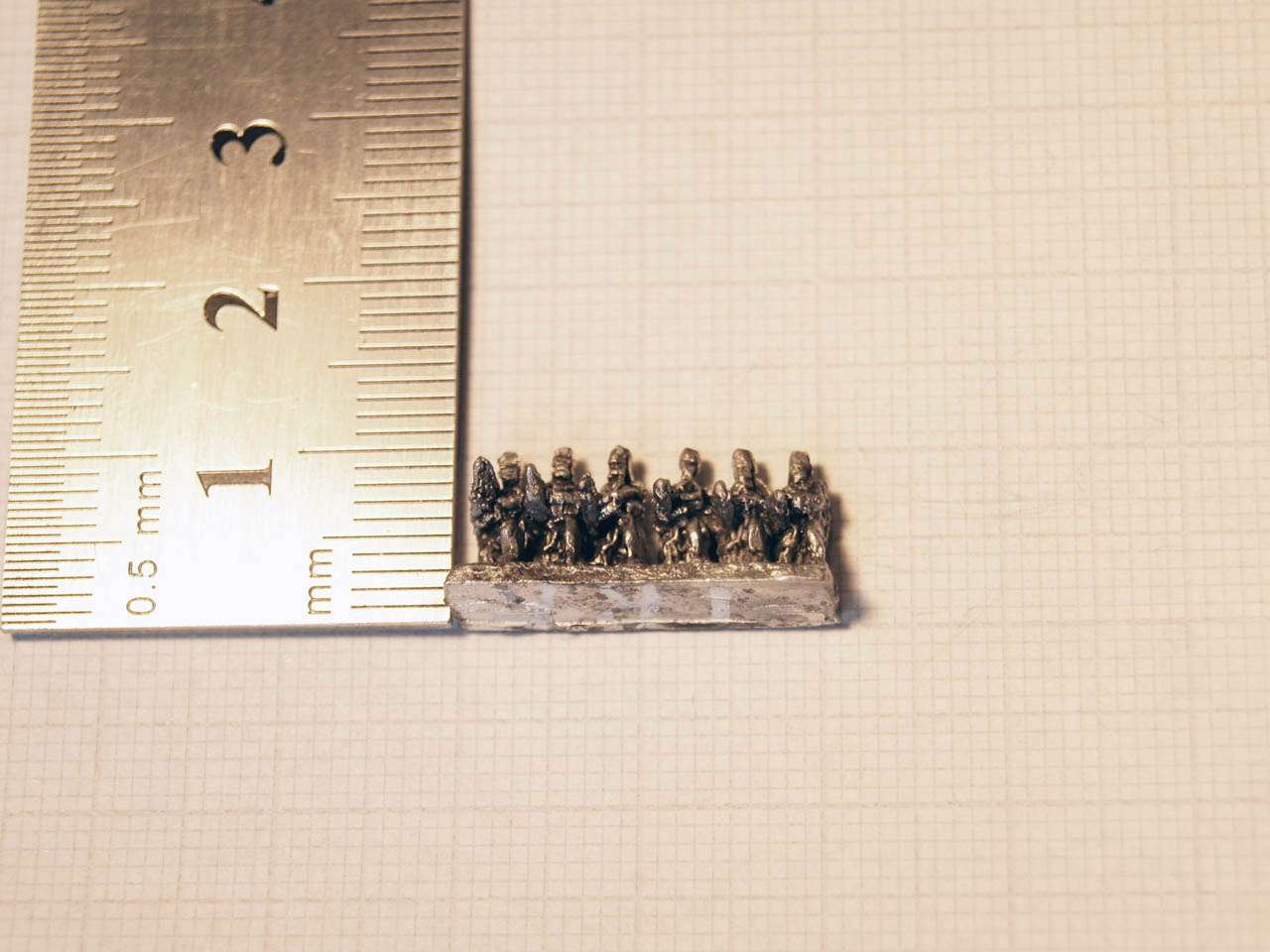 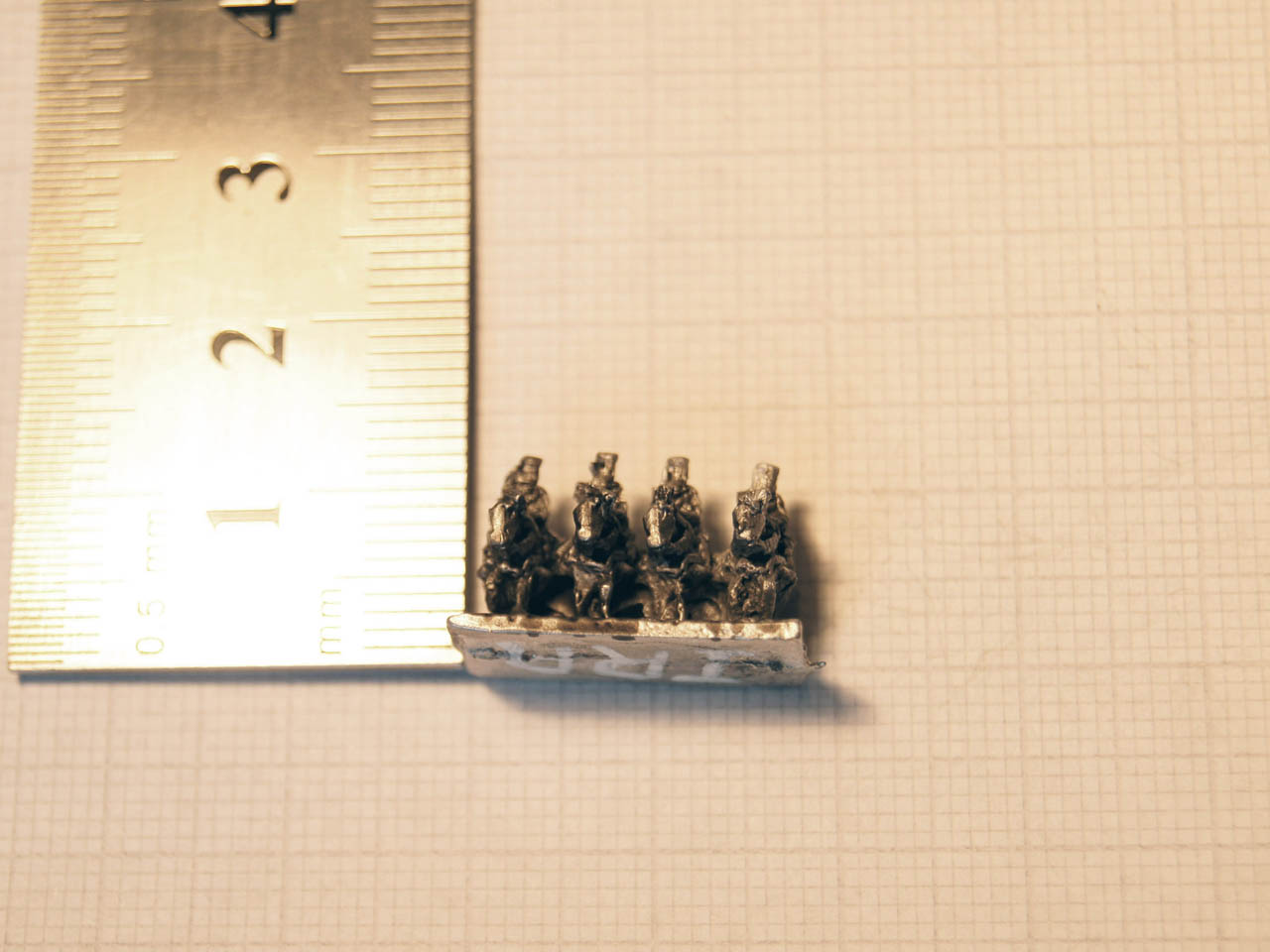 The Setup I had for the other photos didnt lend itself well to Irregulars basing system, as the models ended up tilted araw from the camera slightly.  Below are some better close ups. 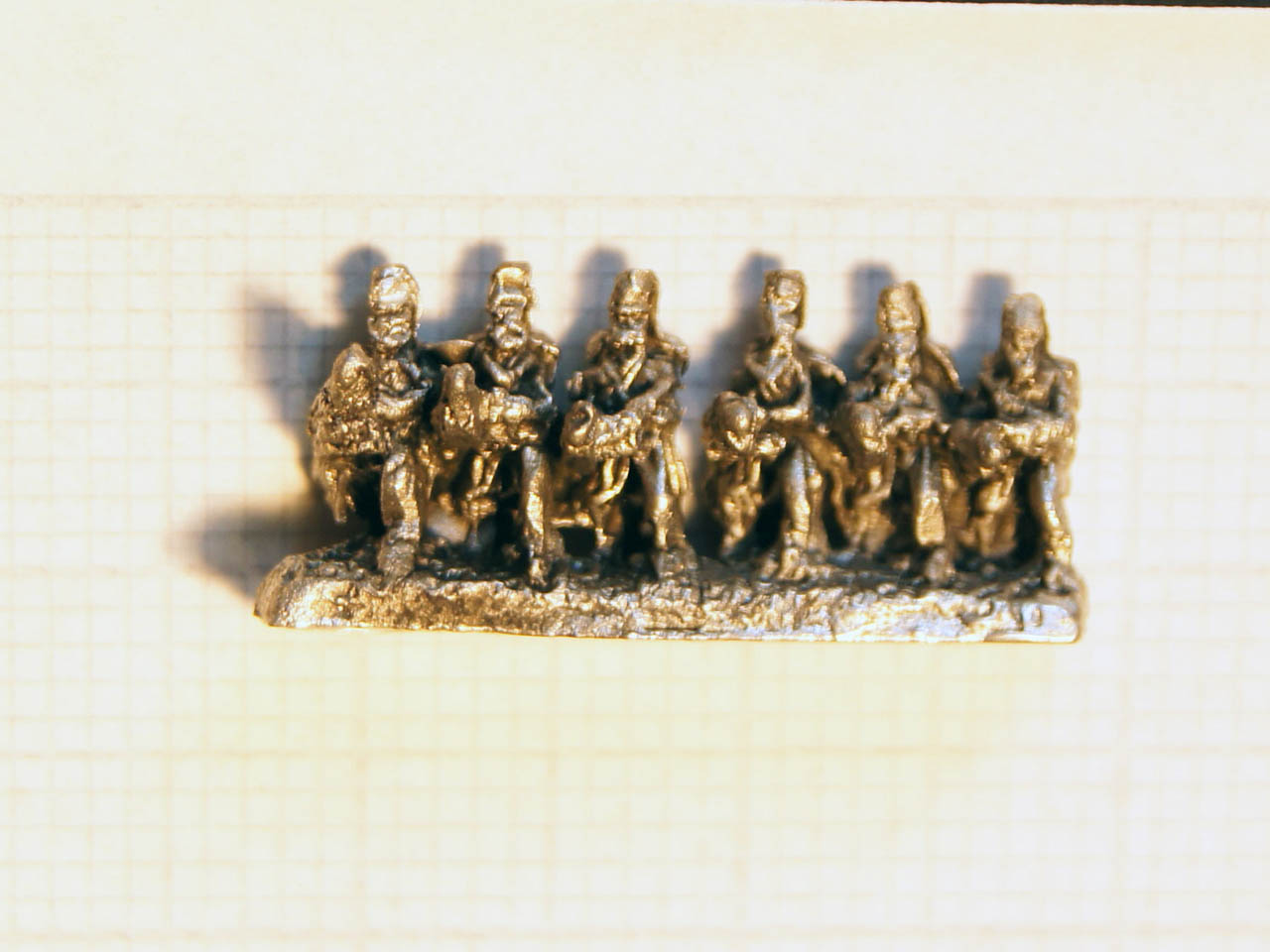 Side by Side comparison 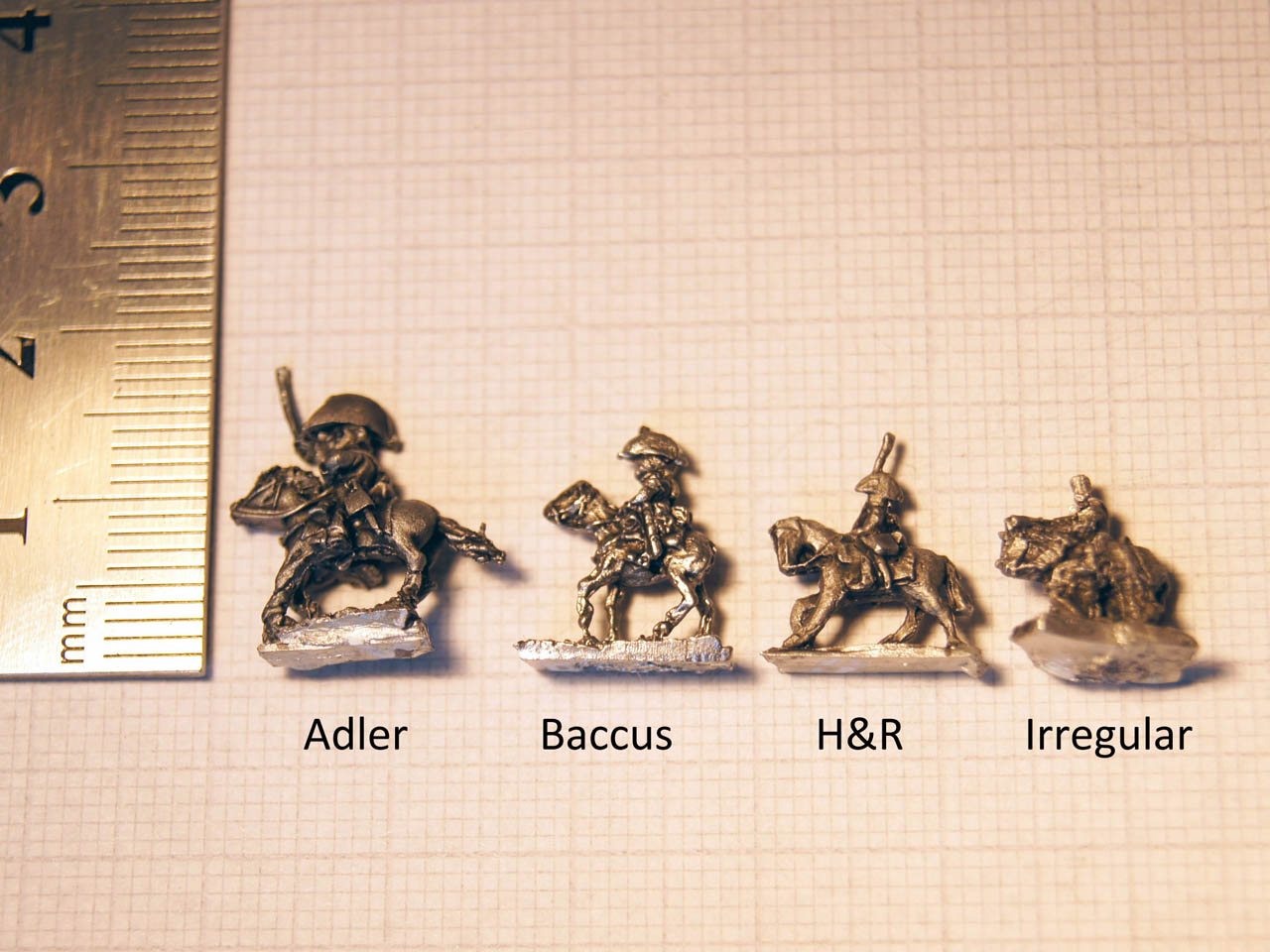 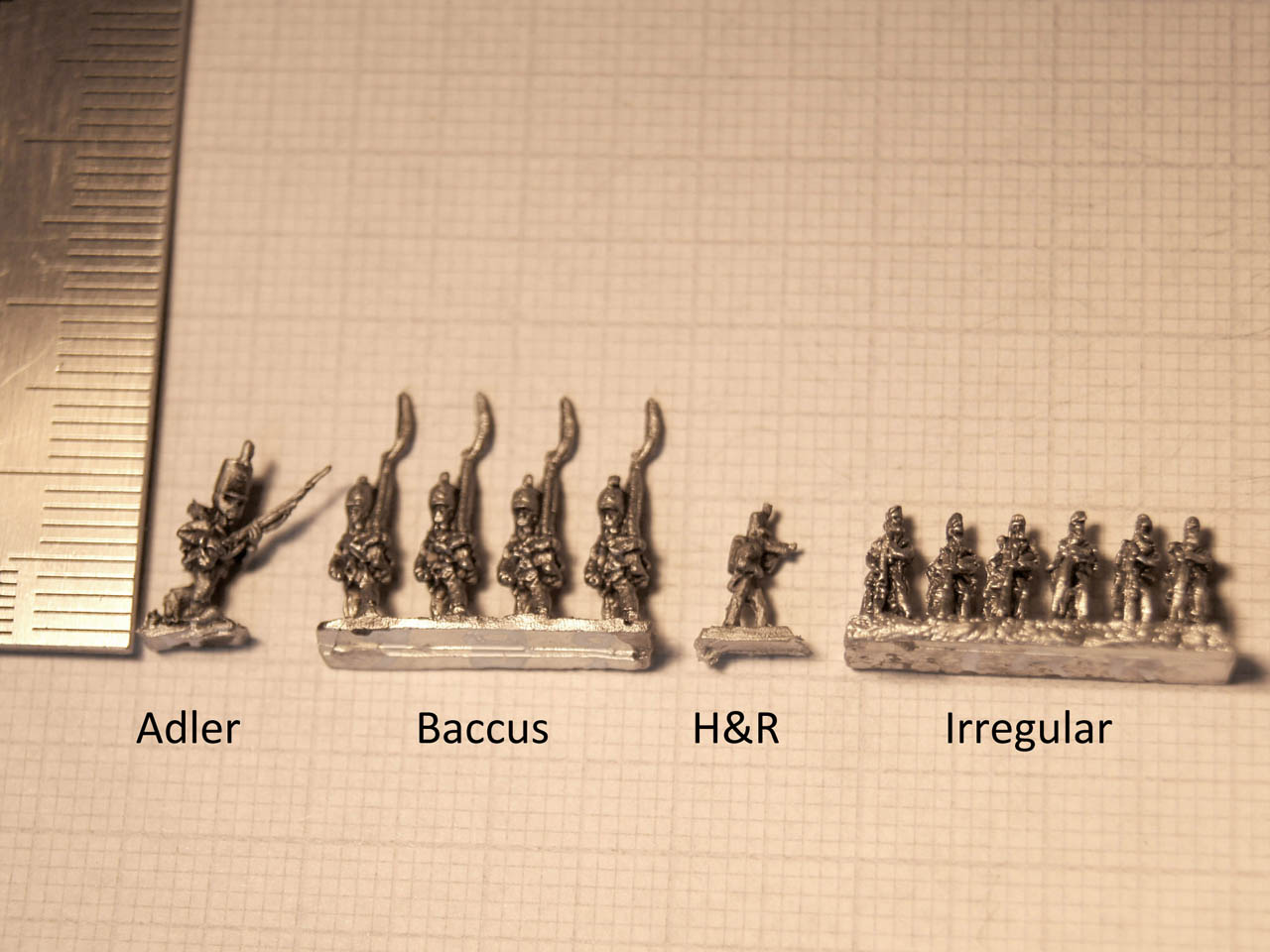